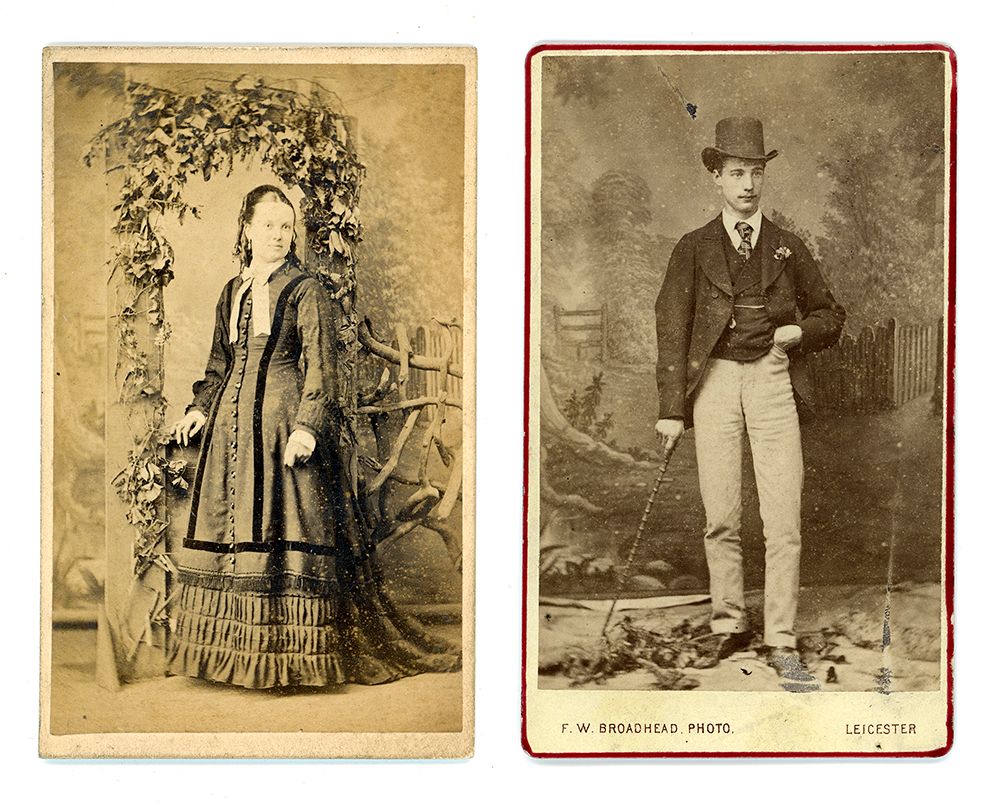 The purpose of this piece is to explore similarities between two carte de visite (CDV) photographs from different commercial portrait studios.

On the left hand side is a full length portrait of a young woman with ringlets standing in front of an arch covered in foliage. Next to it is a full length portrait of a young gentleman wearing his bowler hat with a cane as accessory, who is also wearing a boutonniere usually worn on special occasions. Visible on the floor around his feet is what appears to be foliage similar to that described previously. Just from this initial set of observations it is possible to see that these two photographs have a number of similarities, but it was their shared use of a particular painted backdrop that prompted this side by side investigation.

Detailed findings from my archive show that Frederick William Broadhead occupied his premises at 74 Welford Road in Leicester between 1870-4. The 'Early Photographers' website states that Alfred Knighton established his business in 1868 but was present on the High Street in Kettering from 1874. Leicester is around 30 miles northwest of Kettering, where Alfred was principally based on the High Street for a number of years. Rhyl is a seaside resort in Denbighshire, North Wales. Being upwards of 200 miles away from Kettering, it is doubtful that he regularly attended both studios himself. A possibility is that he would leave his main premises in Kettering with a manager during the high season in Rhyl. This thought occurred mainly as a result of evidence that there were at least two different managers of Knighton's Kettering studio named Edward Holmes and William Prebble. About that latter individual, Northampton Mercury published on Friday 4th January, 1895 that they had committed suicide at the premises of A. Knighton.

The cat has been sleeping in the bed with the mange. It is driving me mad. Others beware. I am going to throw myself in the Mersey if I can reach there to-night. I leave what little money to my dear mother and my darling wife between them. Forgive and forget me. My kind love to all. Telegraph for Mr. Knighton. Burn all the bedclothes and all my clothes. Break it gently to my poor wife.

It is sad to read that William was driven to such an extreme measure as a result of his scabies infection. Interestingly, they ingested cyanide of potassium which was a common (but poisonous) ingredient in photography. Getting back on track with similarities, both reverse designs have been included below. It is not difficult to see how F. W. B's CDV predates A. K's by at least a few years. Despite this, it is possible to see how these advertisements evolved over time.

The design below is from a separate CDV by F. W. B. that dates between 1880-3, which is around a decade later than our original example. However, it is possible to observe that this newer design strongly resembles that of A. K's in numerous respects. They both have 'Marion, Imp. Paris.' written at the base of their mounts, which tells us that they were produced by the same company who were a well known supplier of photographic materials. This knowledge establishes a link between both photographers in that they both used the same mainstream supplier for their photographic businesses.

According to Historic Camera, Marion & Company were credited with bringing the carte de visite to Britain in the year 1857. With this in mind it makes sense that they were a go-to supplier for all manner of photographic equipment and supplies. It is not far fetched to consider two possibilities regarding their use of the same painted backdrop. The first is that F. W. B. sold his backdrop to A. K. as a one off, painted either by himself or an associate. The second (more likely) scenario is that they were both purchased separately from a supplier such as Marion & Company of London. It is uncanny how close both their backgrounds match compositionally, it indicates that all equipment involved in the process of making both photographs conformed to a particular standard used by many establishments. Marion & Company published their first 'Practical Guide to Photography' in 1884, the following advertisement was found in their 'New Edition Revised and Enlarged' which was released in 1885.

Immediately at the top we read 'SCENIC BACKGROUNDS' "representing Interiors, Woodland Scenes, Sea-scapes, River and Mountain Scenes, etc. etc. Size - 7 ft 6 in. high by 8 ft. 6in. wide. Price 50s. A large selection always on hand." The backdrop we are concerned with is most closely a woodland scene, which in the Midlands would have been considered appropriate considering that it is landlocked. Further evidence that Marion & Co. were a popular supplier of photographic goods is evidenced in the advertisement below which also came from their Practical Guide.

Here there are four testimonials, one of which was contributed by 'Mr. F. W. Broadhead, of Leicester'. "January 16, 1884. I received a sample of your new make of Plates, and they are the best I have yet used. They are in appearance more like the best wet plates, and quite free from green fog." Although their reputation for photographic backdrops is uncertain, they were certainly industry leaders for some of their product offering.