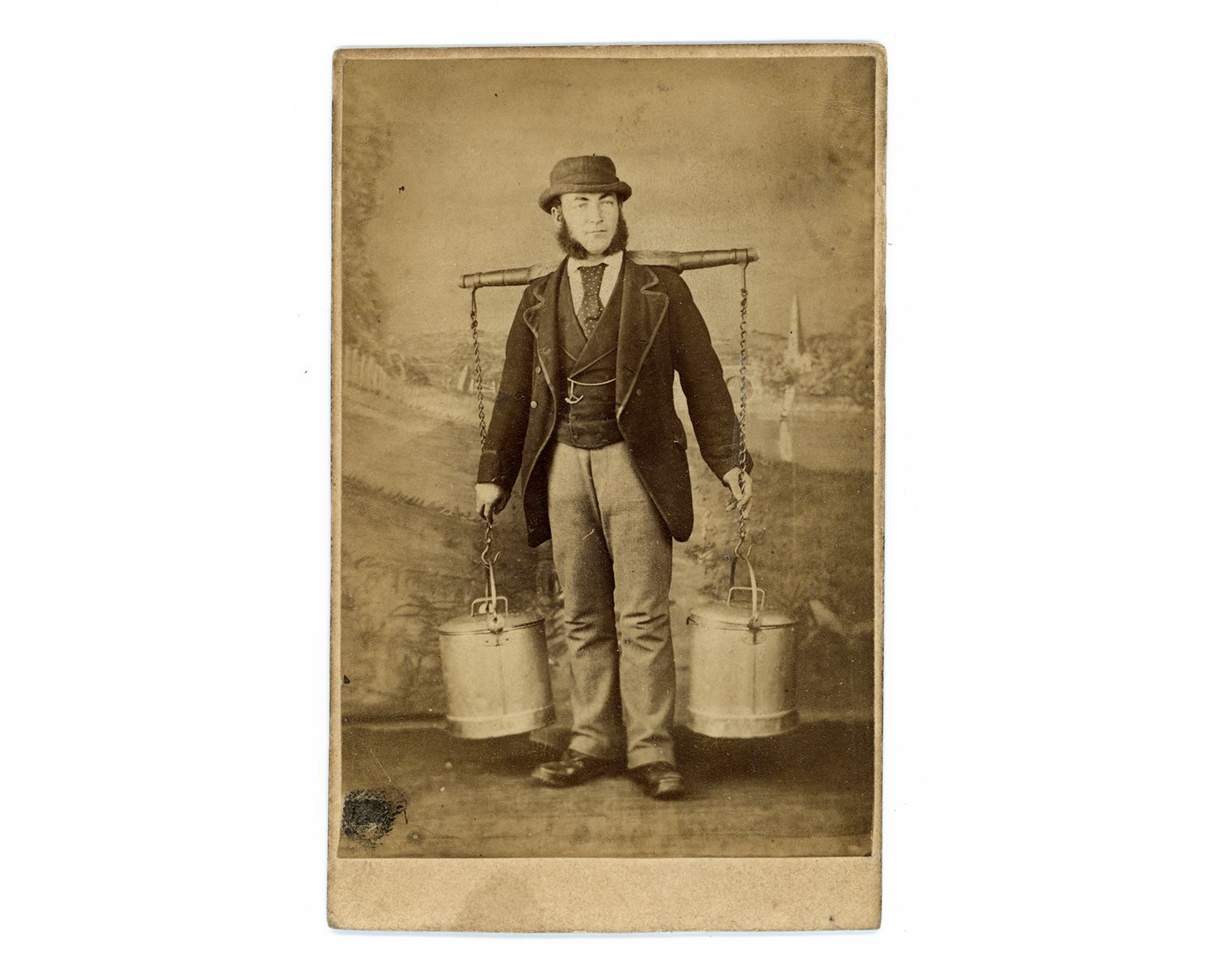 Occupational portraits are important records of occupations that often no longer exist in the same sense as they formerly did. This gentleman stands in front of a pastorally painted backdrop in a way that is clearly posed but nonetheless demonstrative. With a strong stance and well defined mutton chops, it is particularly noteworthy how he is dressed in a way that seems incompatible with the job at hand.

My obscure reason for purchasing this carte de visite related to the artist's surname. Dodson was my fourth great grandfather's mother's maiden name and his middle name as well. Zephaniah is also an unusual first name, it is Hebrew with the meaning 'hidden by god'. Whilst it is the name of several people in the Hebrew Bible and Jewish Tanakh, it most commonly refers to a prophet. Zephaniah prophesied in the days of Josiah, King of Judah (640-609 BCE) and is attributed a book bearing his name among the Twelve Minor Prophets.

Standing with a brace and two metal pails, it seemed pertinent to find out if there are any dairy producers or grocers near Zephaniah's photography premises at 58 Prospect where the carte de visite was made. At numbers 51 and 49 there is a Green Grocer followed by a general Grocer and Baker. These seems promising but then on the following page at 46 was a Milk Seller by the name of Edward Gough. The only problem is that they are shown to have been 65 years old in 1881 which seems much older than the gentleman depicted. There are three sons listed including Richard Edward (37) who was recorded as unemployed, William Henry (36) a factory labourer, and Thomas a Boot Finisher. Ten years prior the family lived in a village called Wroughton which is now in the southernmost part of Swindon. Edward (55) was a Farmers Bailiff out of employment, whilst his sons Richard Edward (27) and William Henry (26) were labourers in the agricultural trade. Even Thomas at 15 years old appeared to be recorded as a servant. It seems plausible that the gentleman in the photograph depicts either Richard Edward or William Henry we know were only a year apart in age. The gentleman looks older than between 15-25 years old so Thomas could be removed with certainty from the equation. Richard Edward and William Henry both died relatively young at 44 and 48 years old in 1889 and 1894. Although it is not possible at present to know with certainty, they certainly had similar experiences with physically demanding roles.

Zephaniah Dodson was born in 1846 to parents Samuel and Elizabeth of Basford, Nottinghamshire. The 1851 census revealed that the Dodson family were situated on Rawson Street, but also that Samuel was involved in the lace making trade. An observation on looking at the original record shows that all of the working occupants of houses on Rawson Street were connected to the local lace industry in some way. Both Samuel and his wife Elizabeth, being born in 1810, were 41 years old at this time, they had 6 children called Maria, Elizabeth, Samuel, Zepheniah, Sisera, and Zillah. Older siblings Maria, Elizabeth and Samuel were Lace Mender, Cotton Winder and Threader respectively. Zephaniah being only four years old would have been looked after by his mother who was not listed with an occupation at this time. By 1861 Samuel is still a Lace Maker but his wife Elizabeth is also bringing in an income as a Grocer. Although Zephaniah at 14 years old was not listed with an occupation, it is likely that he assisted with the family income being the eldest child present at that time. His younger siblings Sisera and Zillah are present from before but there is now the addition of John and Emily who were born in 1852 and 1854 respectively. It it pertinent to note that parents Samuel and Elizabeth were born in Radford, but more specifically an industrial area called Bobbers Mill. Alfred R. Cooke wrote a poem about this place in 1851, part of which went as follows:

It was supposed that the complete poem pitied the poor who lived and worked along the River Leen. It is not surprising that by 1871 Zephaniah moved south to seek better prospects in Swindon, Wiltshire. At 4 Somerset Terrace on Eastcott Lane, he was now listed as a photographer living with his wife Sarah Albinia and their son Leonard who was born in 1869. It appears that they shared their home with another, slightly younger family. Edward Gibbs at 21 years old was a Painter and Glazier who, with his wife Emily, had a 6 month old son called Edward. Why would Swindon have been an appealing place to relocate? Between 1861-71 the Great Western Railway works (est. 1843) created what was known as 'New Swindon', which increased in population by 83 percent up to 7,628. In addition to this, a sale of lands in Eastcott in 1869 led to the development of two new areas. Both of these were on the way to 'Old Swindon', which would have been convenient for shops and for the pleasant aspect of a slope that its hill provided.

On a field south of Upper Eastcott Farm Henry Marrin and John King laid out Rolleston Street and Byron Street. On an adjoining field to the south again the Berkshire Estates Company laid out Dover Street, Western Street, North Street, Prospect Hill, and the western part of Cross Street. On these, houses were built intermittently for a number of years, and the estate was not fully complete in 1885.

Eastcott Lane was how the original hamlet of Eastcott could be reached from the Old Town, this is now known as Eastcott Road and Eastcott Hill. Before the G. W. R. arrived, there were around twenty cottages along with six thatched cottages that stood on a bank beside the entrance to Crombey Street. Fortunately for Zephaniah, Swindon was little affected by the national depression of trade in the 1870s, especially the G. W. R. works which continued to steadily expand. The rapid expansion of the new town gave rise to a considerable building industry which led to bricks being manufactured in large works built on the outskirts. The late sixties and early seventies saw New Swindon change from a large working-class suburb to a town in its own right which by 1880 outstripped the old town in the number of tradespeople. The 1881 record shows that New Swindon was four times as large with a population of 17,678 making it the largest town in Wiltshire. At this time Zephaniah (still an artist photographer) moved with his enlarged family to number 58 Prospect, likely when it was newly built. This road (now named Prospect Place and Prospect Hill) runs parallel to Eastcott Lane where they lived previously at Somerset Terrace.

Including Leonard who was now 12 years old, there were a total of six children including Violet, Gertrude, Lilian, Raymond, and Victor. Elderly mother in law Jane Hobbs was also living at the same address. Ten years before Jane was a widower living at 27 Bridge Street in Reading as a Straw Bonnet Maker. The carte de visite featured in this post is from the period when Zephaniah's photography business was based here. Based on visual aspects of the photograph, it appears to have been produced in the early to mid 1870's. The full length pose, use of a backdrop, and appearance of the anonymous gentleman all point to this conclusion as well.

The Dodson family moved again 10 years later in 1891 to 39 Western Street, which would have been seen as a step up since it was closer to the Old Town centre. Mother in law Jane is longer present but there is the addition of Mabel who was at 8 years old was born in 1883. The eldest son Leonard is working as a Railway Clerk, Violet is shown as a Drapers Assistant, whilst Lilian is gaining experience as a Milliners Apprentice. It is notable that 17 year old Gertrude is listed without an occupation, but this is unchanged ten years later in 1901 as well. The census does not give any clues but there must have been some personal circumstance that meant they were unable to pursue an occupation. Having moved to 39 Eastcott Hill, Zephaniah is at 54 years old an Agent for a parcel delivery company. Victor at 21 years old followed in his elder brother's footsteps to become a Railway Clerk whilst his younger sister is also unemployed. The 1911 census shows that Zephaniah is still a Parcel Delivery Agent but there is an extra section that reveals how of eight children born one had died. Gertrude at 37 years old is still single without an occupation but in the field 'none' was written.

Zephaniah Dodson passed away in 1931 having lived to the advanced age of 85 years old.