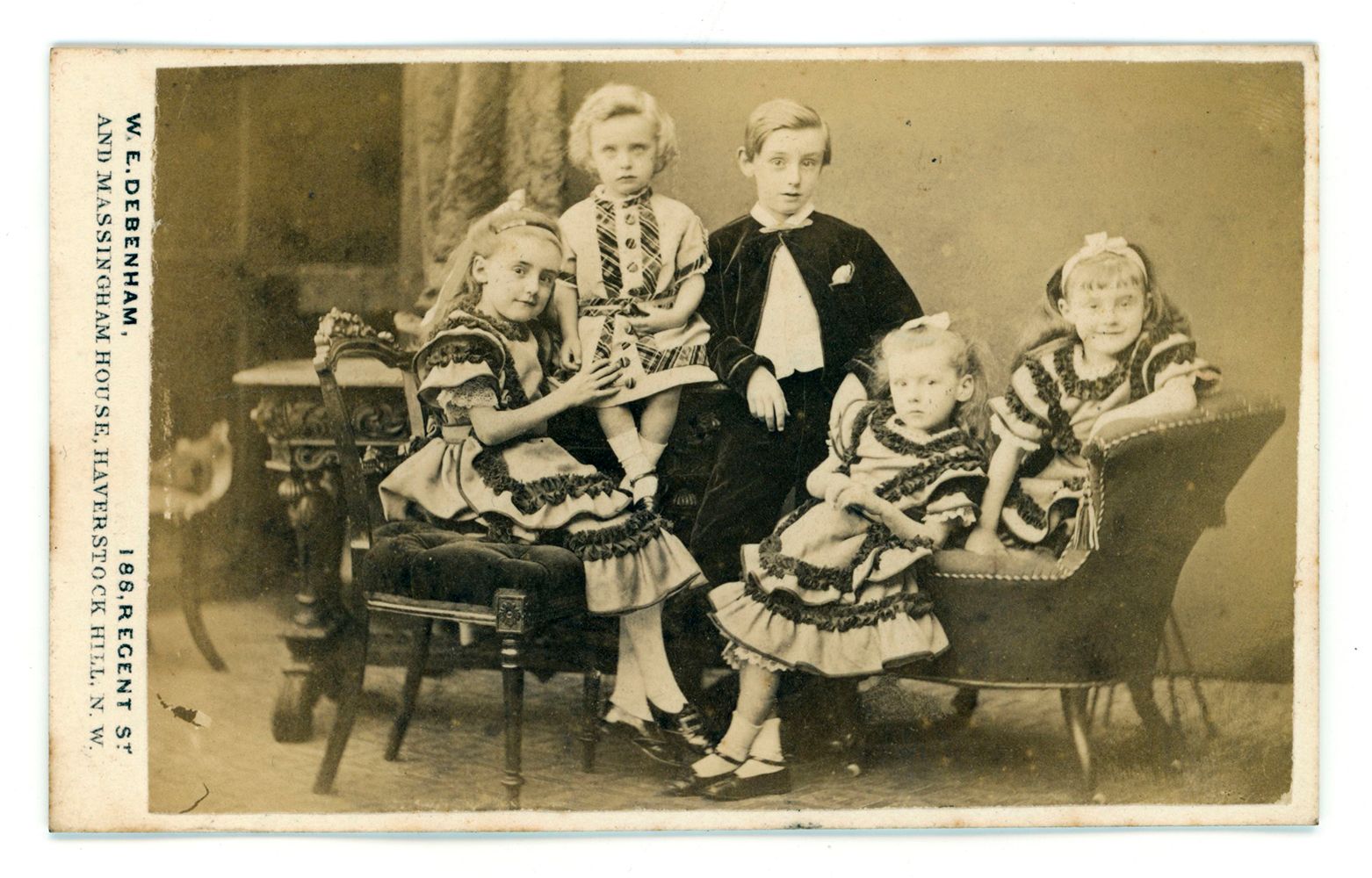 On the mount of this carte de visite we can see that it was from the photography studio of W. E. Debenham. The address is written as 188 Regent Street and Massingham House on Haverstock Hill, North West London.

I first looked at the website debenham.org.uk for information, where they only mention his premises at 158 Regent Street. Below is a screenshot of 'Exhibitions of the Royal Photography Society 1870-1915' which reveals the different locations that this photographer operated at between 1871 and 1898. This reveals that my example was an earlier work that dates back to the 1870's. It is important to note that later mounts have 'established 1862' written just beneath the artist's name.

Exhibit no.319 from the 1872 exhibition was titled 'Photographs of Children' which could refer to my photograph or one similar.

W. E. Debenham is short for William Elliott Debenham who was born as a first child in Bury St Edmunds in Suffolk, England on the 15th January 1839. His parents Samuel and Salome were born in the years 1807 and 1811 respectively. In the 1841 census Samuel was a confectioner at 34 years old whilst Salome was 30. William at 2 years old had a younger brother called Henry who was only 6 months old.

A decade later in 1851, Salome is a boarding house keeper at 16 Harpur Street in Holborn, London. Three of her sons Samuel, Edwin and Arthur aged 17, 7 and 5 years old live with her. Her husband Samuel and two sons William and Henry described in the previous census are not present but they are still recorded as married. In total there were 20 people living at the address and although 16 Harpur Street no longer exists, there are still numbers 9 and 10 which show that it was a four-storey building with ample room for that many occupants.

In 1859 Mr. Debenham became a member of the Photographic Society. By 1861 Salome is living at 16 Mornington Road in St Pancras, London. This time, William Elliott appears as a photographer at 22 years old. His younger siblings Lucy, Edwin and Arthur are 18, 16 and 15 years old but only Edwin is occupied as a photographer colourist. Mornington Road was renamed to Mornington Crescent sometime between 1938-44. The house, being of five stories including basement floor would have provided a luxurious amount of space to the Debenhams and their lodgers who included miniature painter Maria Blagrave and artist Henry Russell. It is possible that the two aforementioned individuals provided artistic services alongside William.

In 1866 William had married Amanda Southwell who was also from a well-off background. Her father William was a proprietor of houses but perhaps more importantly three of Amanda's brothers William Henry, Frederick and Edwin were photographers who operated as Southwell Brothers from their premises on Baker Street.

Five years forward, the 1871 census showed that William was living with his wife and sons Frederick, Charles and John at 4 Powis Place close to where Great Ormund Street Hospital today. We know from the exhibitor record that William was operating as a photographer at 188 Regent Street from 1871 onwards but as he is not mentioned in the census for that address. It is possible he moved into his premises there after the population was recorded on the 2nd April.

For three years between 1871-3 William exhibited at the Royal Photographic Society. The records started in 1870 which is significant. His artworks were mainly portraits, they were likely his speciality at that stage of his career.

Now for an analysis of the children who sat for their carte de visite. The three girls in front are all wearing matching frocks, whilst the older boy standing behind them wears a smart velvet suit. The little girl sitting left of the boy is wearing a different frock with tartan details and sash. Although they are not identified, it is safe to assume that they are siblings or at the very least related to each other somehow.

"Tiny Victorian and Edwardian children were sometimes dressed in dainty shoes strapped with a narrow bar high across the instep."

This quote from a historical article by Jayne Shrimpton accurately describes the shoes worn by the girl in the middle. Her elder sibling is wearing different shoes, suggesting that there were multiple styles available or that there was different footwear for progressive stages of development. Aside from the furniture that is being used for posing the children, there are a few other pieces that are either not fully visible or outside of the main focus. To the right there appears to be an object with four legs hidden behind the girl sitting up on a nursing chair. My hypothesis is that this is a kind of posing stand, as studio photographers at this point solely relied on natural light for their exposures. A problem with this idea though is that none of the other children are being supported this way, so it could be a small side table. My question is this... Why include a piece of furniture in the composition if it serves no obvious purpose? Perhaps it was to create realism and convince viewers that they are looking at a homely interior. To the left is what appears to be a room divider and another chair being seldom used for this group portrait.

In my view, William created an accomplished group portrait of these children. They must have been very well behaved to stay still long enough! My impression is that like the photographer, these children came from comfortable circumstances which we will never fully know.

After the exhibition in 1873, William would not exhibit again until 1877 but apparently not a member as before.  The address being recorded as simply 'Regent Street' suggests that they may have been moving between addresses. An advertisement published in the Hampstead and Highgate Express in 1876 places much more emphasis on his North-West London studio at Massingham house than the 'West End branch' at 158 Regent Street. Below their list of artistic specialities, a written statement longer than any other in this piece highlights the level of quality that they wanted their customers to expect.

After skipping a year to 1879 they were shown to be operating specifically at 58 Regent Street. For that exhibition they had two exhibits of portraits including children. In 1880 however they ventured to show studies made with a drop shutter. This was an early form of camera shutter consisting of a place that releases vertically with an aperture in the centre that goes past the lens opening to create an exposure.

In 1881 at 41 years old, William is living with his wife Amanda and four sons at 46 Haverstock Hill (Massingham House), Kentish Town in St Pancras. Notably, the eldest who shares his fathers name and was born in 1868 did not appear in the previous census. However Frederick, Charles and John are present who like their elder brother were scholars at the time. William would have traveled between his home address on Haverstock Hill to the commercial premises at Regent Street, but after showing more portraits at the annual exhibition of 1882 he stopped trading at Regent Street in favour of Massingham House. This would remain the case for the next 25 years worth of exhibitions he showed as part of.

"Now devotes his personal attention to photography at the studio for the North-West of London. Massingham House. 46, Haverstock Hill." William published this advertisement until at least five years until 1888. It is also notable that 158 Regent Street was his first premises in 1862. Out of interest, I looked into what was published in the London Evening Standard on October 9th 1883 which has been reproduced below.

The writer was very clearly complimentary of Debenham's portraits, particularly on their composition. Sadly a year later after this success his wife Amanda passed away in 1884 at the age of 41, leaving William a widower.

In the London Evening Standard of 11th November 1886, an excerpt of a letter written to the editors by William was published in response to a sewing machine being taken away by a broker under a warrant of distress. It provides an intriguing insight into legal contradictions found at that time.

That year Mr. Debenham photographed the wedding reception of Miss Evershed as reported in the Hampstead and Highgate Express of Saturday 9th October.

"The relations of the happy couple, with the officiating clergy, then proceeded to the house of Dr. and Mrs. Evershed, Mansfield-villas, where they were photographed by Mr. Debenham, the eminent photographer. Then luncheon was served to over fifty guests..."

The Graphic newspaper of  Saturday 12th May 1888 reproduced a head and shoulders portrait of a 'Mr. Harben' taken by Mr. Debenham. This is in fact Mr. Henry Harben of Hampstead who was a pioneer of industrial life assurance.

The 1891 census record shows that W. E. Debenham is still a photographer based at Massingham House on Haverstock Hill. His sons William, Frederick and Charles are bookkeeper, travelling clerk and assistant photographer respectively. Another son Arthur is a scholar at 9 years old. He would have been around two years old when his mother passed on.

In 1893 Mr. Debenham was a judge for the fourth annual public exhibition of works from the members of the Hackney Photographic Society. There were over 500 works exhibited with 14 gold, silver and bronze medals awarded. The same year the photographer also made a practical demonstration of collotype printing for the Royal Photographic Society.

The census recorded in 1901 bears similarities to the one carried out ten years prior, as the photographer is still a widowed head of household whilst his son William has married a woman called Amelia. A bookkeeper ten years prior, he became a secretary for a limited company which may have been his father's photographic business. The couple were shown to have a four year old son also called William who was born in 1897. Younger brother Charles was also still living at the address as an assistant photographer.

By 1911 Mr. Debenham moved to 55 Adelaide Road, Hampstead where he is described as a portrait painter which marks a shift of profession away from photographer. The only other occupants are his school-going grandson who was present in the previous census and Servant Housekeeper Julia Ann Mears who had worked for the same family for over 30 years since she was 27.

In the most recent census of 1921 Mr. Debenham was living as a 'retired photographer' at 311a Finchley Road, Hampstead with Julia, although interestingly she was described as a visitor with no occupation. It is possible that although they were not married, they cohabited. The property still exists as a four storey townhouse with a commercial premises on the ground floor. William Elliott Debenham passed away at 85 years old on the 14th November 1924.

Exhibitions of the Royal Photographic Society 1870-1915