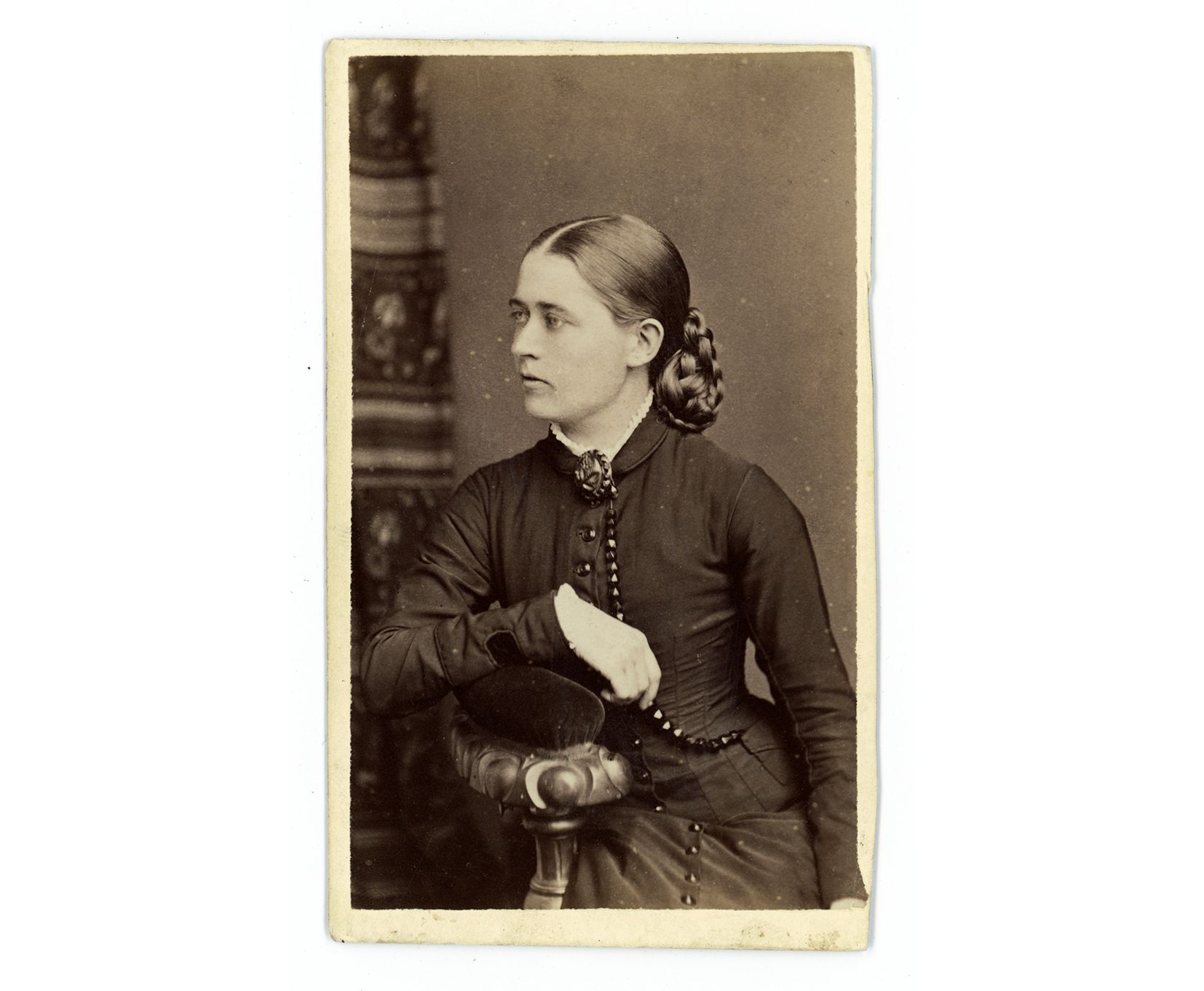 The feature image shows a seated portrait of an anonymous woman taken by Edward Shayler of Redcar, Yorkshire. I picked this up in appreciation of how well the negative was exposed and printed onto albumen paper. One of the edges is imperfectly trimmed, but for me this adds charm. Perhaps more significantly, there is much about her fashion sense that should not be overlooked. A large brooch and chain that trails down into her lower pocket is unmistakably made from Whitby Jet, which was mined most extensively during the Victorian era. Although the first Whitby Jet Workshop was established in 1808, it was not until the 1870's that the industry was at its height with around 200 active workshops. The photograph was taken at this time just before a rapid decline due to the import of soft Spanish Jet, an inferior but cheaper material.

Shayler was born in Clerkenwell, which is the south-western part of the London Borough of Islington. Although the birth took place in 1835, his baptism did not take place until the 27th June 1836. The earliest census in 1841 shows that his parents James and Ann Shayler (née Anderson) were born in 1806 making them both 36 years old at the time. From eldest to youngest their four children were Mary, Edward, Eliza, and Albert.

Ten years later in 1851, we learn more about what occupation Edward's parents were involved in at their address 82 St John Street Road in Clerkenwell. James Thomas Shayler at 47 years old is a Furrier alongside his (seemingly) oldest son John who, born in 1829, was not present in the previous census. Another son called James, born in 1831, is listed as a Clerk. Edward, now apparently the third eldest sibling is a scholar at 15 years old. His four younger siblings Eliza, Alice, George, and Annie are also scholars.

The census record of 1861 reveals that Edward's parents and his siblings Eliza, Alice, George, and Annie remain at the same address as ten year prior. Meanwhile, Edward himself is living at 84 Windsor Road, Islington with his wife Mary Ann and younger brother Albert who was born in 1842. Both siblings are listed as "Photographer (Master)". Albert was previously mentioned 20 years prior in the 1841 census record. Albert is last seen in 1871 as a photographer lodger still living on St John Street Road although by 1872 he was deceased at 31 years old.

By 1871 Edward relocated away from the capital with his wife Mary Ann to open his photographic business in Redcar, North Yorkshire. Their address at this time was Richmond Cottage on Bath Street. Together they have three daughters called Mary, Ada, and Annie. Ada with her birth place as London in 1867 compared to Annie's birthplace in Yorkshire in 1870 shows that the move took place sometime during a three year period between 1867-1870. According to PhotoLondon, Edward's first studio at his parents abode on 82 St John Street Road, Clerkenwell, Islington lasted over ten years from 1854-67.

In 1881 Edward's family has grown with the addition of James Thomas, Edith, and Mabel. There has been a slight change of address to number 11 Bath Street. They moved next door to number 10 by 1891, but Alfred Goodchild and his wife Mary occupy number 11 as photographers which suggests an expansion of the business. Edward's now grown up children Ada and James Thomas (ages 24 and 17 respectively) contribute their services as photographers assistants. A new addition to the Shayler family is Edward who was born in 1883. The 1891 census shows that 10 Bath Road is still the address of Edward's family and photographic business, but present this time is his wife Mary Ann, daughter Ada who is by this point considered a 'spinster' at 34 years old, James Thomas a photographer's assistant helping his father, and youngest son Edward who is a Tailor's apprentice.

The most recent census currently accessible is that which was taken in 1911. Edward is 75 years old still operating as a photographer, his son is still present at 37 years old as an assistant. Edward is also still living at the same address but now as a working tailor. Ada passed away in 1907 which is why still was not present in the latest record. With an early start in photography from 1854 onwards, he had a long run of more than half a century which is quite remarkable. It surprised me that nobody had carried out proper research into this individual before. Edward passed away in 1919 at the advanced age of 85 years old, whilst his wife Mary followed on the 16th June 1921.