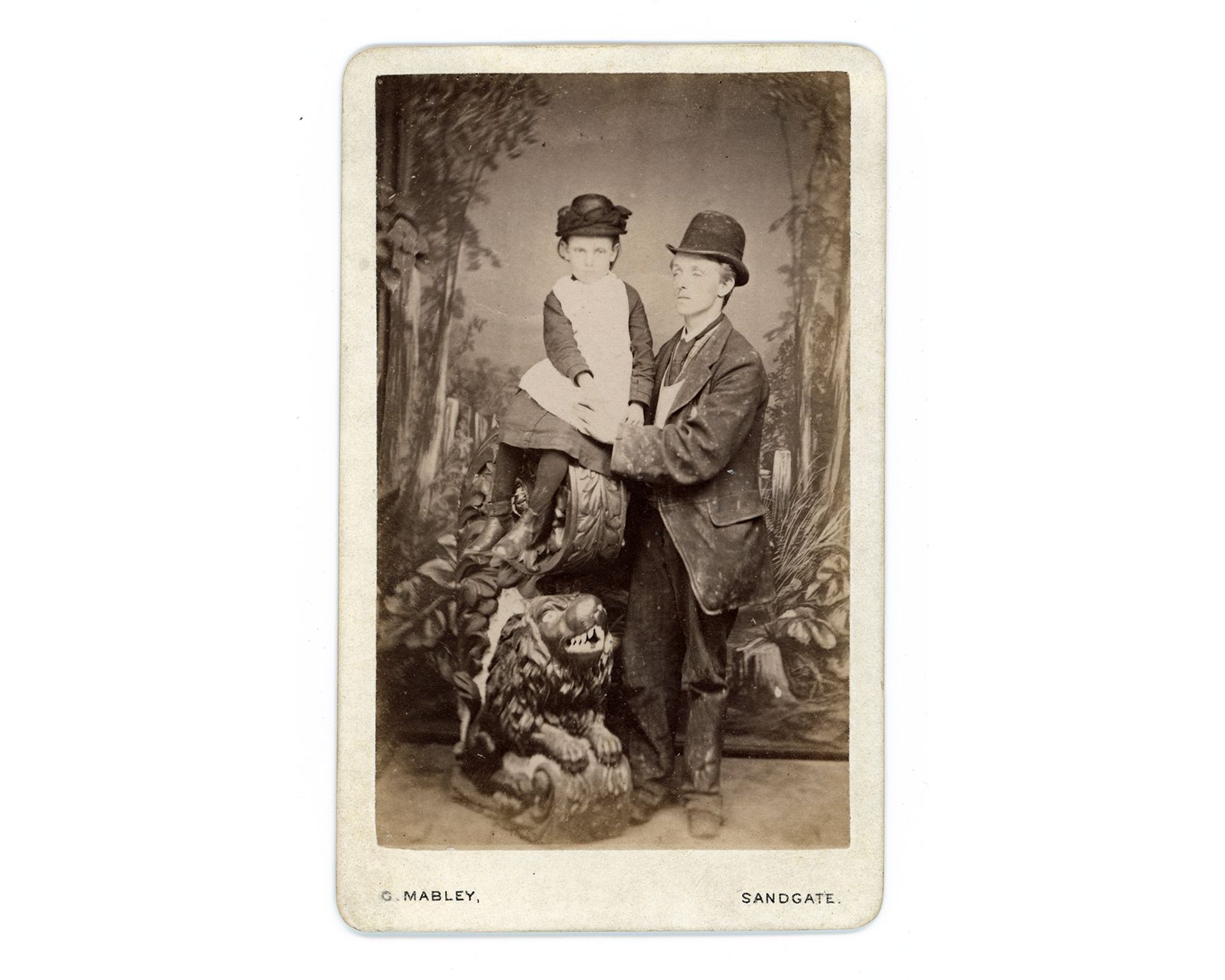 Whilst browsing through old photographs, this carte de visite (CDV) by George Mabley of Sandgate caught my attention. The child (who is likely a young girl) is seen sitting with support from her father atop a rather large sculpture that appears to have been carved out from a solid piece of wood. I have personally never seen this prop elsewhere or in any other pictures from the Victorian period. My initial idea was to contact Folkestone and District Local History Society by email. I received a response from Peter and Annie Bamford who unfortunately were not able to provide any more detail about the sculpture or backdrop used, as neither matched their own selection of CDV by the same photographer. They did however provide information that their first studio premises was at 16 Broadway, Sandgate.

The 1861 census shows George and Mary as shoemaker and shoemakers wife who were both 22 years old and lodging at a shoe shop on Victoria Street in Alderney, Guernsey. Ten years later in 1871 they are both living on the High Street (which was then renamed to Broadway) in Sandgate as photographers, although it was only Mary who was listed as such. They also have three daughters named Clara, Bessy, and Helen who were 9, 8, and 2 years old respectively. Helen having been born in Alderney in 1869, proves that the family had only recently relocated. Unfortunately Helen only lived to 3 years old, as she passed away in 1871. Why was a small village like Sandgate selected as their location for a photography studio business? In 1868 the Folkestone Bathing Establishment was built adjacent to the Lower Sandgate Road at the base of the Leas Cliff for all year round bathing. The heated sea-water swimming baths and other facilities including a large saloon, reading, billiard and refreshment rooms marked a period of increasing grandness for Folkestone, which became a fashionable resort. This was supplemented from the 1870s by ‘Fagg’s Patent Bathing Carriages’.

It makes sense that George and Mary saw this rapidly developing area as an attractive opportunity as a new generation of photography studios were opening all over the country. Only a few years after their arrival the Sandgate Branch railway line was officially opened in 1874, which would have resulted in more trade through added infrastructure and local tourism. Sinnock, Howard & Co's Directory of 1875 mentions George as a photographer at No. 16 Broadway. Further development took place from 1876 onwards at the base of the Leas Cliff along Lower Sandgate Road where an extensive pleasure ground and promenade was created. On the 28th September 1878 Mary became a widower but on ordering a death certificate from the General Register Office, a surprising revelation was found.

The cause of death was described as 'Mania à Potu' which led to lung complications that George succumbed to in a matter of days. This term originates from the early 19th century, it is scientific Latin for ‘madness from drink’. Delirium Tremors is another name for the same condition. The Canterbury Journal, Kentish Times and Farmers' Gazette of Saturday 28th September, 1872 reported an issue with drink involving the same gentleman:

At the Police Court last week, Charles Gillard was summoned by Louisa Webber for an assault on the 13th inst. Complainant stated that she lived at the Fleur de Lis Inn, Sandgate, with the defendant, as his wife. She was not married. On Thursday morning, at two or three o’clock, he struck her on the lip and threatened to murder her. He also struck her on the arm. [Complainant exposed her arm. on which a bruise was visible]. She called for protection, and Mrs. Flisher came. She was in fear of his doing her some bodily injury. Mary Jones, landlady of the Fleur de Lis Inn, said that complainant and defendant lived at her house. Thursday morning, about half-past two, she heard screams, and heard the defendant threaten he would murder her. Witness begged of him to leave complainant alone. She did not see blow struck, but there was blood on the sheets, and her lip was cut. Cross-examined by the prisoner: She begged him to go down stairs. Complainant stopped with her all night because she was afraid he would murder her. Ellen Brenton, living at Sandgate, deposed that on Wednesday night she was at the Music Hall, complainant being beside her. Defendant came in with a man named Mabley. He caught hold of her by the arm, and was going to strike her. He dragged her down stairs. He said be was going to pay her out when he got home. Cross-examined: She was not drunk. —In defence Gillard stated that the woman was drunk. He called George Mabley, photographer, who was with him at the Music Hall, and who stated that the complainant was intoxicated. Defendant was bound over in the sum of £20 and one surety in £20 to keep the peace for three months.

In 1881 Mary was operating as a photographer on the High Street, this name was reinstated since it changed from Broadway ten years prior. When this happened, all buildings were renumbered. Only a single CDV that featured Mary's name and details could be located, this was shared with me by the Folkestone and District Local History Society. It shows that her address was No. 19 Broadway, which is believed to have been the same premises as before that stood on the corner of Military Road. It is important to note that we are now approaching when the CDV was likely produced. A question that comes to mind is: Why does the advertisement on the CDV still mention George who was deceased? A possibility is that Mary continued to use leftover mounts or decided to keep operating under the same name for business purposes. Also present at the same address is eldest daughter Clara Jane, now working as a photographer's assistant at 19 years old whilst younger sibling Edith was a scholar at 8 years old. Bessie was 18 years old working as a domestic servant at 17 Manor Road in Folkestone. At 42 years old Mary remarried in 1882 to George Shaw who was at that time a former sergeant of the 15th The King's Hussars. Kelly's Directory for Kent shows a Mrs. Mary Mabley operating as a photographer on the High Street of Sandgate in 1882, but they do not appear in any subsequent business directories.

On Saturday 16th August 1884 the Folkestone Express, Sandgate, Shorncliffe & Hythe Advertiser printed an announcement from Mr. Alex J. Grossman, Photographic Artist. They wrote that they had taken the "unique and splendid Studio in the Broadway, Sandgate". There is a strong possibility that this was the former studio of Mary Mabley as there is no evidence that she operated after 1882. "All negatives have been kept in case duplicates are required" suggests that Grossman purchased the entire business including glass negatives. It was a wise decision to sell the business, as photography studios started to decline by the 1890s. The opposite is true of the area though, as it continued to develop at a steady rate. The Folkstone Lift Company installed the Leas Lift in 1885 which was a water-balance tramway that allowed easy ascent and decent of the cliff. When the Folkstone Pier and Lift Company opened Victoria Pier opposite the lift's base station in 1888, demand increased so much that a second parallel adjacent pair of lifts were erected in 1890. Shortly after this happened the Sandgate Hill Lift Company was formed to build a lift from the western end of the Leas to the base of Sandgate Hill. This unusual lift was a hybrid between a water-balance lift and conventional tramway which featured an ornate iron bridge partway along its track where it passed over Radnor Cliff Crescent. The Sandgate Hill base station was close to the terminus of the Hythe & Sandgate Tramwa which made day trips to Hythe and Sandgate via the lift and tramway a popular excursion for visitors to Folkestone.

There were a number of photographers who operated on the Broadway in Sandgate. The 1881 census revealed that a man named William Perry was boarding with the Jacob family, this is significant because William Henry Jacob (who was 13 at the time) became a photographer himself later on. Kelly's Directory of Kent, Surrey and Sussex published in 1891 shows that William Jacob Henry was trading as a photographer at 3 High Street, Sandgate. That same year Perry was living as a photographer with his wife (20 years his junior) at 21 Grace Hill in Folkestone. Samuel Jacobs was another practitioner who in 1861 lived at 4 High Street (Broadway) in Sandgate as a tobacconist. By 1871 they moved to 189 Snargate Street in Dover but this time they were described as a photographer. Seven years after relocating again in 1881 to a nearby address at 56 Dour Street, they chose to commit suicide at 60 years old having "lived too long".

Dover Express published a detailed account of what happened on Friday 20th July, 1888. As was typical for the time, this photographer poisoned themselves with cyanide of potassium. On searching for photographers in Sandgate in 1891, there were 49 individuals in some way connected with photography. Mary was not amongst these though, as she has by this time relocated with her husband (who was now a Blacksmith) to 12 Abbots Hill in Ramsgate. Being listed as a Lodging House Keeper shows that she changed occupation away from photography. The same year her youngest daughter Edith, (now 18 years old) has followed in her older sisters footsteps by becoming a domestic servant. This was at Grongar House on Canterbury Road in Margate, a private school led by schoolmaster David R. Parry. Interestingly, ten years later David moved with his family to Paddington in London to work as a tobacco agent. The eldest daughter Clara (now 29 years old) is seen married to William James Godden, a painter who lives at 18 South Street in Folkestone with their three children Herbert Lewis, Albert Henry, and Bessie Edith.

By 1901 Mary had returned to Sandgate as a widower, living at 4 Wellington Terrace. Present with her was youngest daughter Edith Johnson, Edith's 1 year old child William, and 9 year old granddaughter Hilda Godden. There were also two Domestic Servants and two lodgers living in what was most likely a large house with at least five inhabited rooms. Ten years later at 72 years old Mary relocated again to Cheriton, a northern suburb of Folkstone. She lived by herself on private means at 13 Stanley Road. Annie and Peter Bamford of Folkestone and District Local History Society remarkably had in their possession a well captured postcard photograph of Mary Mabley standing outside of her home. Clearly very houseproud with strong features, she was a resilient woman who preferred to be in charge than have to work for somebody else. Being not too far away from Sandgate, it seemed likely that they based themselves up that way to be near family. A little more investigation revealed that some of her children and grandchildren lived nearby with their families. Mary passed away in 1915 at 75 years old with her burial taking place at St Martins Church, Cheriton on the 29th June.

Looking at Mary's life as a whole shows that her time as a photographer was relatively short lived, having practiced for just under 15 years. The occupation she gave up would have taken advantage of increasing numbers of visitors to Sandgate as the entire area continued to develop into a fashionable resort, but being a lodge house keeper would have been just as profitable for a steady income. Whilst it is not possible to know if it was Mary or her first husband that was particularly interested in photography, it is certain that they practiced it commercially as a means to an end. Aside from a small presence in local business directories, neither of them advertised or exhibited work in an artistic context.