Lithography and Photography: A Case Study Using Frederick William Broadhead as an Example 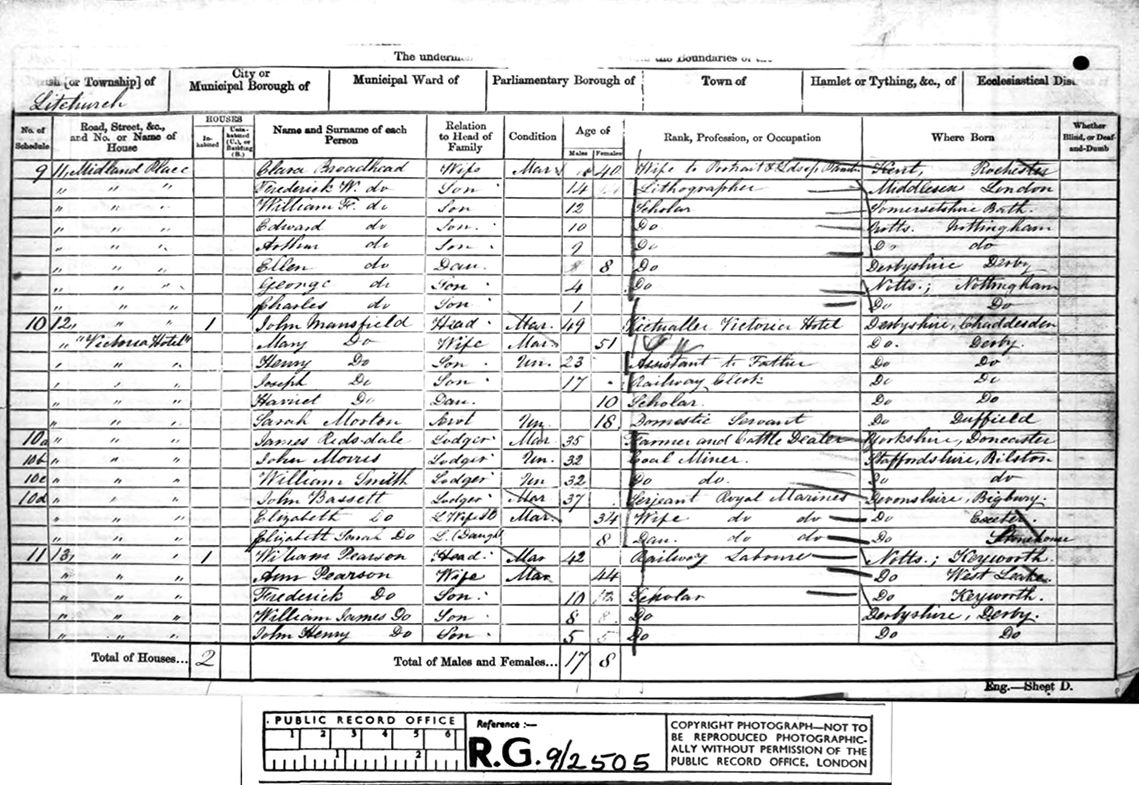 In the 1861 census, F. W. B. (then aged 14) worked as a lithographer. Lithography was invented in 1798 in Munich by Alois Senefelder, a German actor and playwright who “developed it as a means of printing music more cheaply than by engraving, but, realizing its potential for other uses, went into business with various partners to operate lithographic presses in the capitals of Europe.” (Griffiths, 1996) According to Griffiths, the full commercial impact of lithography was delayed for around twenty years due to Senefelder’s lack of business acumen and a number of technical difficulties. A growth of interest took place in Britain when Charles Hullmandel established their own print shop which contributed to an enormous amount of production using this process. Of the well-defined categories of work that emerged from this, it was the topographic tradition that was most prominent. At this time lithography overtook aquatint as the favored method of producing large colour plates in books. By the middle of the 19th century, the popularity of this medium declined significantly with only a few artists paying it much attention. The main revival did not begin until the 1870s, when Henri Fantin-Latour (followed by Odilon Redon) started using it as their medium of choice. It is not possible to know precisely why F. W. B. decided to switch into photography close to when lithography experienced a resurgence amongst artists, especially as the carte de visite craze had ended by the time he started practicing. Benjamin Walter wrote in his essay A Short History of Photography that a sharp decline in taste set in when the medium was ‘invaded on all sides by businessmen’ who touched up their negatives. With this being the period of the thick photographic album, there was a market for family portraits which featured the use of accessories such as pedestals, balustrades, and oval tables which by that point referenced a time when long exposures rendered supports a necessity. What started with headrests and knee supports quickly expanded to include anything from traditional painting considered to be artistic. Walter states that this started with the pillar and curtain which he noted was described as ‘absurd’ by a contemporary English professional journal. The question is: F. W. B. perpetuate this decline in taste? The short answer is yes, but it is important to provide detail in this area. Without a doubt, all work carried out by F. W. B. would have been first class as advertised, but in cases where he did not carry out the work himself there was occasionally a significant drop in quality. This was most prevalent in full length portraits where the use of props and backdrops was more heavily relied upon. Peres wrote that the commercial albumen carte de visite was the most common connection with the public in the 1860s which later that decade included the larger cabinet card format. Although other larger and more expensive products would have been available for purchase, “the two smaller formats were the bread and butter of the working photographer until the end of the century”. (Peres, 2007) On this basis it is possible to sympathize with the commercial photographer who needed to balance the books. Early on in his career, F. W. B. built a reputation for his enlarged (club) portrait heads painted in oils which may have been sold with a dozen vignette carte de visite. The polarity evident in his work is described by Benjamin when he noted that “in these early times do object and technique correspond as clearly as they diverge in the succeeding period of decline.” (Benjamin and Leslie, 2016) Object and technique corresponded particularly well in his close-up work where there was nothing to distract from sitters whilst they were flattered by shallow depth of field and soft focus provided by the large petzval portrait lenses in use. As can be expected of any commercial business, the photographer has always had to cater to the demands and requirements of their customers. Benjamin highlighted that “pictures were produced in premises where from the outset each customer met in his photographer a technician of the latest school and where the photographer met in every customer a member of a class on the ascendant, replete with an aura which penetrated to the very folds of his bourgeois overcoat or bow-tie.” (Benjamin and Leslie, 2016)

It is necessary to explore how lithography and photography intersect, and identify which elements of experience in the lithography industry would have translated seamlessly into how F. W. B.’s photographic business operated. When lithography arrived, it was the first entirely new printing process since the discovery of intaglio in the fifteenth century. “With lithography the technique of reproduction reached an essentially new stage. This much more direct process was distinguished by the tracing of the design on a stone rather than its incision on a block of wood or its etching on a copperplate and permitted graphic art for the first time to put its products on the market, not only in large numbers as hitherto, but also in daily changing forms. Lithography enabled graphic art to illustrate everyday life, and it began to keep pace with printing. But only a few decades after its invention, lithography was surpassed by photography. For the first time in the process of pictorial reproduction, photography freed the hand of the most important artistic functions which henceforth devolved only upon the eye looking into a lens. Since the eye perceives more swiftly than the hand can draw, the process of pictorial reproduction was accelerated so enormously that it could keep pace with speech.” (Benjamin, 2008) The ability to rapidly prepare a design and print at a pace that could keep up a constant pace of change was revolutionary in itself, but reproduction was an even more significant aspect of lithography and photography.

William Mills Ivins Jr., noted that it was in the nineteenth century when the printed picture came of age, as “not only did it use all the older processes but it invented more new ones than had been known in all previous history.” (Ivins, 1978) He imagined that “the number of printed pictures produced between 1800 and 1901 was probably considerably greater than the total number of printed pictures that had been produced before 1801.” (Ivins, 1978) This was due to them being made for all classes of society for every conceivable purpose, especially by the end of the century where they were commonplace in books, periodicals and daily newspapers. Furthermore, advertising and propaganda would be ‘spread’ on outside walls with other designs displayed inside for decorative purposes. The manufacturing and engineering industries benefitted significantly from the possibilities of print. Ivins claimed that “the most important single development in the century was the discovery and exploitation of photography and photographic process.” (Ivins, 1978) This was because it “eliminated the draughtsman and engraver from the making of exactly repeatable pictorial statements, and after that it went on to develop ways of repeating such statements in unlimited quantities. Such statements were no longer confined to the life of a single printing surface.” (Ivins, 1978)

According to Ivins, it was not until the 1860s that photography caught up with daguerreotyping (which replaced the painted miniature) “in the favour of the public, which was primarily interested in portraiture and liked the minute detail of the daguerreotype, as well as its preciousness and fragility.” (Ivins, 1978) Unlike the daguerreotype, Scott Archer’s wet collodion process was free from patent restrictions which along with availability of materials made it commercially viable. It was the dominant process from its introduction in 1854 until well into the 1870s, remaining largely unchanged. It is important to note that wet collodion created a positive or negative on glass which due to greater light sensitivity allowed longer working hours than previously possible. When used with colloid surfaced paper, a match in detail of the daguerreotype was obtained. In part due to these innovations, the professional market grew from “just two portrait studios in London in 1841 to 4,715 photographers in England and Wales at the 1871 census”. (Pritchard, 2010) Having started in 1869, F. W. B. contributed to the latter figure with the opening of his first studio. Between 1841-71 various ways of sensitizing colloids such as albumen, collodion, and gelatin were introduced. New chemicals provided novel qualities whilst glass plates were eclipsed by the more convenient dry plates which were faster and offered a wider spectrum. Lithography was not capable of photographic reproduction of half-tones until Meisenbach solved this with the invention of a linear screen in 1884 “which was quickly applied to typographic image reproduction and then successively to photo-lithography and to offset printing.” (Landis, 2013) It is understandable why photography, already able to create continuous tone using emulsions, may have been considered a better option for the artist who wanted to work with a medium that had also become commercially available. So, not only could the photographer work with continuous tone (later reproduced in lithography through half-tone) it was also possible to benefit from reproducibility which was exploited through the sale of carte de visite and cabinet cards. Carte de visite were often sold by the dozen either in a single or multiple poses at a greater cost. Larger cabinet cards were sold in bundles of six with similar terms for optional extras.

A key difference between both mediums was the ability of photography to create enlargements. This was by no means new by the 1870s, as John William Draper was credited with his first mention of the method in 1840 when in the American Repository of Arts, he wrote about original photographs being made using a small camera that could then be photographed again using a larger camera to create any desired size of enlargement. Americans Wolcott and Johnson patented a method of copying and enlarging daguerreotypes in 1843. Solar cameras were introduced in the late 1850s which were a larger version of eighteenth century solar microscopes that were analogous to ordinary cameras but with the relative position of negative and lens reversed so that sunlight shone through a glass plate to expose sensitized paper inside. This was followed by Woodward’s solar enlarging camera in 1857 which was operated outdoors to produce life-size prints from quarter to half plate negatives, further improved in the 1860s and 70s with a clockwork heliostat to rotate the mirror in synchronisation with the sun’s passage. Désiré van Monckhoven registered a patent in 1863 for a horizontal version of Woodward’s design. It is not known what kind of enlarger was used by F. W. B. for his enlargements, but by the time he started in the late 1860’s hand-coloured enlargements of daguerreotypes and carte de visite prints became available from commercial firms. Although the carte de visite craze had ended, F. W. B. was able to pursue a new market for luxury enlargements coloured in oils of local sitters. The significance of this was that these larger items could be sold for more money, but being situated in a working-class community meant that the club system would be used. This involved the use of agents who would canvass for subscriptions that were more financially viable.

Benjamin, W., 2008. The Work of Art in the Age of Mechanical Reproduction. London: Penguin Books.

Griffiths, A., 1996. Prints and Printmaking: An Introduction to the History and Techniques. 1st ed. London: British Museum Press.