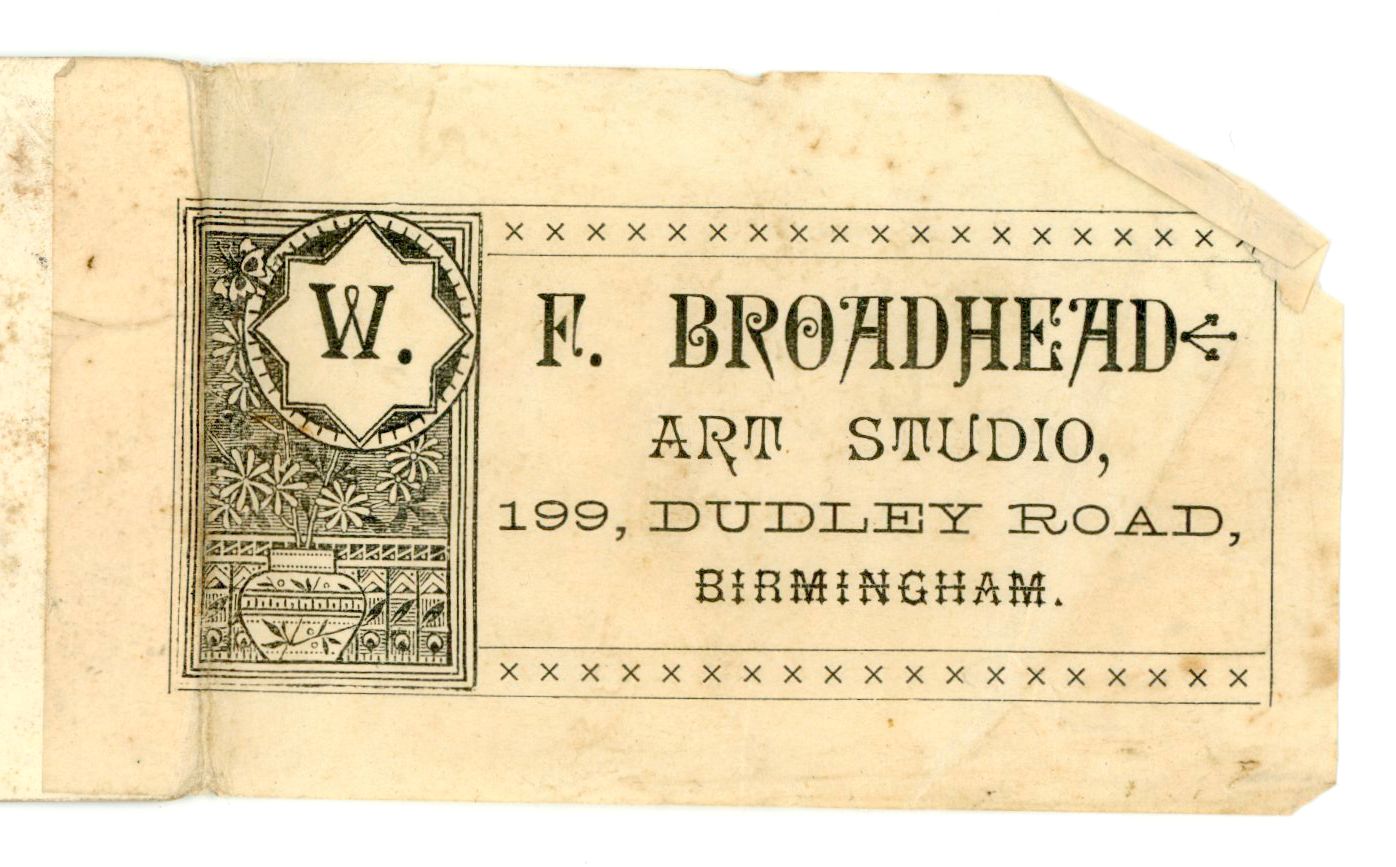 My third great granduncle William Francis Broadhead was born on the 19th July, 1848 to parents Frederick Dodson Broadhead and Clara née Lee. At the time they were living at 15 Caroline Buildings, Widcombe in Bath. Historic England dated this terrace of twenty three storey residences, each with two windows (originally twelve-pane sashes) to circa 1800, the earliest mention of them is in a directory from the year 1800¹.

The 1851 census record shows by March 30th, 2 year old William was living at 40 Derby Road (West Side) in Nottingham with his parents and two siblings. Notably, his father Frederick Dodson was shown to be 39 years old at a time when newborns born in 1851 had an average life expectancy of around 40 years old². William's older brother Frederick William Broadhead (my third great grandfather) is the eldest child at four years old. William's younger brother Edward is 11 months.

On April 7th 1861, William and his family relocated again to 11 Midland Place in Derby. In addition to those present in the 1851 census, Arthur (9), Ellen (8), George (4), and Charles (1) have been welcomed to the world. Although it is clear at this point that Frederick Dodson was an artist who travelled for commissions, we can see from the birth locations of each of his children that Nottingham and Derby are the main towns they worked between in that ten year period. We also know that they were based in Kennington, South London and Widcombe, Bath for a period of time. Born in Nottingham himself, Frederick Dodson may have returned to the Midlands so his growing family could benefit from being around other relatives.

The head of the household as in the previous census is still working in the prestigious profession of a portrait and landscape painter.

Built in 1842 by Architect Francis Thompson. Red-brick with ashlar plinths; stone band at 1st floor and decorative brick treatment to coped parapets and to chimney cornices.Slate roofs. 2 storeys and cellars. Generally 2 windows each but no.2 has 4 windows; sashes with glazing bars. Stone doorcases with small flat hoods on brackets and pilasters; floor-panelled doors and fanlights.

William enrolled at the Leicester School of Art on the 17th November 1875. At the time he was 29 years old with photo colourist as his occupation, his address given as 8 Flora Street, King Richard's Road in Leicester.

This educational establishment had not existed for very long, as it was first opened to students on the 1st March 1870.

"The foundation of the School had been driven by Leicester citizens and local societies, including the Leicester Literary and Philosophical Society with the desire to create educational and trade opportunities for local men and women. The Art School Committee selected Wilmott Pilsbury, a landscape painter who had exhibited at leading London galleries from the 1860s, to be the first Principal." (DMU Heritage Blog, 2017)

Until 1877 classes were based at a formerly disused warehouse situated at no.2 Pocklington Walk, but despite substantial work to make this site a suitable teaching space there were still problems with light and ventilation. This made it necessary to move into a new purpose built facility adjoining the New Walk Museum.

PRESENTATION TO THE REV. FATHER NICKOLDS.

On Monday night, a meeting was held in the Holy Cross schoolroom, Wellington-street, to present to the Rev. Father Nickolds a purse containing fifty guineas, and an illuminated address. About 300 persons sat down to an excellent tea in the schoolroom, after which a meeting and concert were held. The room was decorated with flags, mottoes, &c. Mr. T. Cox presided, and, amongst others, there were present, Rev. Father Nickolds, Rev. Cyril Bunce, Rev. Thomas Laws, Messrs, France, Bennett, Shea, Harrison, Brown, Broadhead, Gonty, &c.

Before the commencement of the concert, Mr. W. Frank Broadhead read the following address: “To the Very Rev. Father William Thomas Nickolds, O.P., D.D. – Very Rev. and dear Father, Fifty years have passed since your reverence was invested with the holy habit of St. Dominic; therefore your spiritual children, together with a numerous body of friends, cannot allow the occasion to pass without congratulating you most heartily on the happy event. Their desire is that such congratulations shall not consist of empty words, and leads them to pray that you will graciously accept of the accompanying purse and its contents as a token of their united love, and to show the reverence in which you are held by them, together with this their earnest prayer to Almighty God that through the merits of Jesus Christ our Lord, and the intercession of his ever-blessed mother and your holy father, St. Dominic, your life may long be spared to minister to their faith and consolation. – (Signed), T. Sands, president, Rev. Father L. Weldon, treasurer, C. T. Harrison, secretary, and eight of the committee, on behalf of your affectionate children in Jesus Christ.

ASSAULT ON A WIFE — Wm. F. Broadhead, artist, &c., Flora-street, was charged with committing an assault on his wife, Annie Elizabeth, on the 8th September.

Mr. Fowler appeared for the complainant, who said they were married in 1870, and since then they had not had good health. Her husband was an artist, living in Flora-street. On Wednesday, the 8th of September, through illness, she was unable to sit up in bed, and a friend of hers, Mrs. Carrey, came to her and took her out for a drive, and they returned home about half-past seven o’clock the same evening. She retired to bed almost immediately afterwards, and her husband came home at about half-past ten. He came upstairs at once, and told her where she had been. After that he began to use very indecent and filthy language, and told her that he had got somebody better to bring into the house if she liked to go. He also took a little child out of bed and put it in the other bed, and afterwards told her that he did not want to be “tied to a bag of bones” like her, and then dragged her out of bed, and she hurt her shoulder by falling. Being too exhausted to get into bed she sat in the chair, and had to submit to further indecency too vile for publication. On the Friday morning she went to the Infirmary, and stayed there for six weeks, and was still under medical treatment. — by Mr. Wright: During the time she was ill her husband brought two fowls and other things home for her. Did not go to her husband and tell him that she wanted to be separated from him.

The cause of the quarrel was as to where she had been, her husband at the time stating that he had had his spies to tell where she had been. Was sitting in the chair until she was able to get back into bed again. It was about half-an-hour. Saw him the next morning, but he did not speak to her. — Mr. Cox-Hippesley, surgeon, said he had attended the complainant at various times for four years. She was not in a fit condition to attend household affairs, and he ordered her to go away for a month when he ascertained that she could not be attended to at home, and that his orders were not carried out. Witness at that time thought she was likely to die unless proper measures were taken. The day before she went into the Infirmary she called upon him, and he considered she was in the same state of ill health as when he left off attending her six months before. — By Mr. Wright: She is constitutionally very weak and nervous. — Addressing the bench Mr. Wright pointed out that there was no corroborative evidence that an aggravated assault had been committed, and contended that every effort had been put forth by the defendant to restore the complainant to health. — The magistrates retired for about ten minutes, and on returning into court the Chairman said they had given a patient hearing of the case, and had found him guilty of committing a common assault, and he would be sentenced to one month’s imprisonment with hard labour. — On receiving the sentence the defendant, while attempting to speak to a friend near to him, fainted.

A Disclaimer, this is to give notice, that W. F. Broadhead, artist, Flora-street, who was reported, in your issue of Sunday last, as being charged at the Police Court with an assault, is not F. W. Broadhead, photographer, Welford-road, nor in any way connected with his business.

In the High Court of Justice Probate Divorce and Admiralty Division — Divorce.

In the Matter of the Petition of Annie Elizabeth Broadhead
Wife of William Francis Broadhead — Petition for Judicial separation.

To the High Court of Justice Probate Divorce and Admiralty Division — Divorce.

That on the 2nd day of May 1870 your Petitioner then Annie Elizabeth Fisher, Spinster was lawfully married to the said William Francis Broadhead at Holy Cross Chapel Wellington Street Leicester in the County of Leicester.

That the said William Francis Broadhead has treated your petitioner with great unkindness cruelty and neglect and has frequently struck beaten and otherwise assaulted her.

That in the month of October 1876 at Aylestone Street Leicester he assaulted your Petitoner and slapped her face knocked her head against the wall tried to strangle her and said he would do for her.

That on the 21st day of May 1880 at Flora Street Leicester he abused your Petitioner assaulted her seized her by the neck and threw her on the floor.

That on a Sunday in the month of August 1880 he struck her in the face knocked her head against the wall and threw water over her.

That on the 8th day of September 1880 he dragged your Petitioner out of bed threw her on the floor and pulled her nose violently.

That on the 8th day of November 1880 the said William Francis Broadhead was convicted of an assault upon your Petitioner and sentenced to a months imprisonment.

That he has frequently committed adultery with Jane Hobday.

Wherefore your Petitioners prays that she may be judicially separated from her said Husband and have the custody of her Children and such further and other relief in the premises as to this honorable Court may seem fit.

When reading this census taken on April 3rd 1881, it initially seems like he left Leicester with his first wife, Annie Elizabeth Broadhead. However, whilst William Francis has decided to only slightly alter his identity by going on the record as Frank Broadhead, his mistress described in the divorce petition as being Jane Hobday is masquerading as his wife by using her name. It is clear that he had abandoned his family at this point as they lodged at the Blue Star Coffee Yard in Bristol without any children present. Other than having different names, all other information is accurate.

130a Birkin Avenue, Beeston in Nottingham

For years it has been a mystery as to what happened to William Francis Broadhead aka Frank Lee after their last appearance in the 1901 census. It was known that they had died as the 1911 census shows his second wife Jane as a widow.

Crumpsall Workhouse was formerly on the site of what is now the North Manchester Hospital. A hospital had actually existed on the site since 1875, this is likely where Frank was taken after he was found wandering approximately four miles away at Great Ancoats Street in the inner suburb of Ancoats. After not recovering from his coma, he was conveyed around three miles to Philips Park Cemetery which is east south-east of the city centre. Opened in 1866, this was the first municipal public cemetery in Manchester.