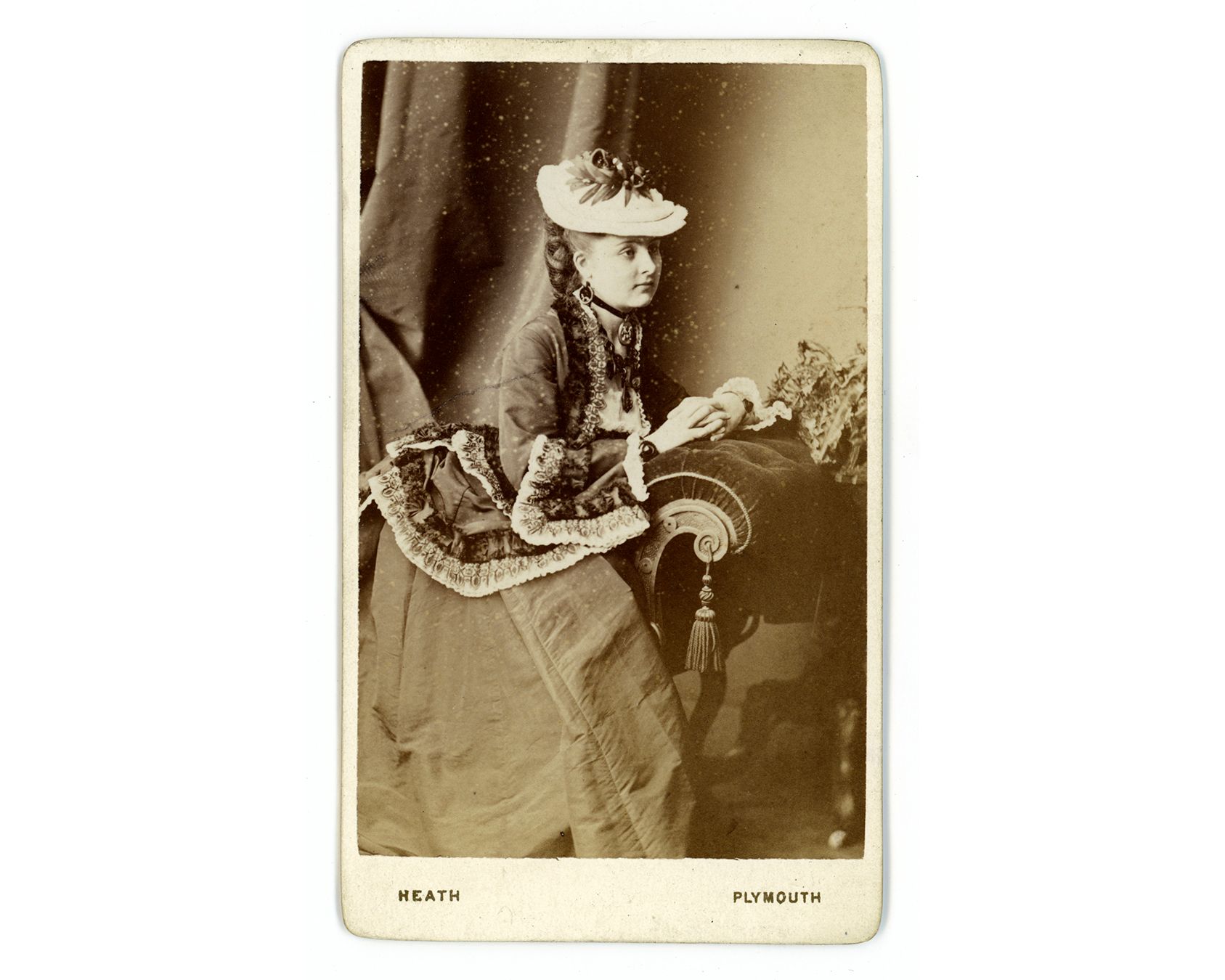 During my time as an assistant for photographer Sian Davey, I was required to visit Spectrum Photo Lab in Stonehouse at least once per week. This prompted me to look in my collection to see if any examples from Plymouth were present. In my search, a fashionable young woman photographed by Heath (and Bullingham) of 24 George Street, Plymouth was found.

On searching for George Street, it was found that this no longer exists due to the Plymouth Blitz, a series of bombing raids carried out by the Nazi German Luftwaffe during the Second World War. A total of 59 bombing attacks destroyed nearly every civic building along with 26 schools, 8 cinemas and 41 churches. In total 3,754 houses were destroyed with a further 18,398 seriously damaged. There were a total of 1,172 civilian fatalities with 4,448 injured in some way. The devastation of the largely Victorian era streets of central Plymouth meant that in the autumn of 1941, the City Council appointed eminent town planner Professor Patrick Abercrombie. A Plan for Plymouth, co-authored by James Paton Watson, was published in March 1944. This radical redevelopment diverted main roads around the city, whilst the original city centre (with the exception of Union Street) was erased and replaced with a grand vista from Naval Memorial on Plymouth Hoe to Plymouth railway station. Plymouth was the only British city to retain its wartime plans; reconstruction of the city centre began in 1948 and was completed in 1962. The following three maps were reproduced with the kind permission of Plymouth City Council.

We can see from this plan that the city centre was to be divided into functional precincts with varied urban roles including hotels, cultural institutions, offices, and retail. Architecturally, Abercrombie was most influenced by designs from New Delhi, Canberra, and 19th century Beaux-Arts ideals that shaped Washington DC and Paris. Additionally, the garden city movement informed the separation of homes from industry and recreation from commerce. Despite the functionalism of neighbourhood units, they incorporated schools, churches, libraries, swimming pools, and cinemas amongst other community facilities that were well received by residents. Professor Jeremy Gould described what would be carried out as "an egalitarian grid, spacious, airy, uncomplicated, accessible and gapingly open to all – the very model in stone, brick, glass and metal of the post-war welfare edifice." Those maps represent an idealised version of what was actually conceived, where corners were clearly cut to conform to a limited budget. Below is a screenshot from Google Maps showing a much more messy network of roads than the utopian vision that was pledged in the original plan. I have added a black line joining the two ends of George Street which miraculously still existed but highly estranged from their original function as main entrances to a busy district.

Google Maps and Goad's Insurance Plan show George Street travelling from the southwest up to the northeast. Aside from a few narrow lanes running away in different directions, this thoroughfare splits in four directions allowing travel along Bedford Street, Frankfort Street, Cornwall Street, and Russell Street. None of these streets survived, but below is a postcard of how George Street looked before 1948 when Abercrombie and Watson's plan for Plymouth was set into motion. This gives an idea of what the general character of this area was before it all changed. 24 George Street in particular is shown as a premises for opticians and photo suppliers. This is still the case in Goad's Insurance Plan published in 1939.

I visited the exact same location on a wet day in August 2021. What used to be George Street is now a dead end road known as Old George Street. The Victorian clock tower built in 1862 and an old bank building which would have once been monumental are now dwarfed by utilitarian postwar architecture. The Theatre Royal on the right was replaced with the Theatre Royal Car Park, which is not simply referential as the building on the left was built as its direct replacement. Although large in scale, neither structure evokes quite the same sense of grandness that used to be present. We can see that the road has been hemmed in from how tight the new Theatre Royal venue is to the clock tower next to it, but just from this direct comparison it is possible to understand just how much damage was caused during World War II. The old Lloyds Bank building (now a Wetherspoons type restaurant called The Bank) is a useful guide to work out where 24 George Street would have been, as no's 27, 26, and 25 roughly represent an equal depth on the aerial map. The photographic premises would floated somewhere between the current office building and its adjoining car park.

Still standing in the same spot but facing away from what used to be George Street, there are obvious signs of decline where a number of buildings would benefit from being redeveloped to suit the present day needs of local residents. The derelict Gala Bingo hall, Reel Cinema, and empty commercial units are all wasting valuable space that could serve as a much needed green space close to where people work.

An office building and adjoining car park occupy the likely former site of 24 George Street. The Theatre Makes You Feel! street art visible on the far left was thought provoking to see, especially on a building that exhibits multiple smashed windows that are visible standing below. It is concerning how much cars and office buildings continue to be a priority over almost all else in cities across England.

Looking back from the corner of the car park gives a useful additional perspective that goes yet further to show how many Victorian buildings were lost. After a road crossing, it felt right to create another image showing the office building from a distance to imagine where George Street used to be. I took it for granted at the time, but the entire time was spent walking through open spaces that would have been obstacles before.

This open outdoor area with a water feature is actually part of New George Road which serves a similar commercial purpose to its predecessor. There is a range of typical high street shops and eateries that can be found almost anywhere else in Britain. Going back a bit further brought me to the northeast end of where the original George Street would have finished. I discovered a tunnel through a building that leads into a large open area where shop deliveries would be unloaded on a regular basis. The top of Plymouth Guildhall is just above visible above the flat roofline.

Now that there is an understanding of where Heath and Bullingham's business premises would have been situated on a former Victorian street, it is pertinent to look at the main proprietor. William Heath was born in Stoke Damerel which was part of Devonport before it was amalgamated with Stonehouse and Plymouth in 1914. In 1851 he was living with his parents William and Jane Heath at 46 Fore Street along with his younger siblings Thomas, Louisa, and Ebenezer. William Heath senior was a boot maker employing nine men, whilst sons William and Thomas were opticians and nautical instrument makers employing two men and one apprentice. Ten years later William was a master optician who at 37 years old was living with his wife Mary and daughters Alice, Elizabeth Mary, and Ellen at 1 Clarence Baths, Stoke Damerel. For historical perspective, it was exactly 30 years before in 1831 when 22 year old naturalist Charles Darwin lodged at 4 Clarence Baths for 15 shillings a week before he set sail aboard HMS Beagle. This ship in command of Caption Robert Fitzroy was being prepared for a voyage around the world at that time, primarily to survey the coast of Patagonia and Tierra del Fuego in South America. Shaun Standfield found out the following about Darwin's stay in Devonport:

From his temporary base in Devonport, Darwin commenced to finalise his own arrangements whilst the Beagle was being painted and fitted out, preparing to sail in late November.

In his journal and in letters to family and friends, Darwin noted how he spent some of his time whilst waiting to sail.  He walked often to Plymouth, spending time at the Athenaeum and in the company of William Snow Harris, the Plymouth-born inventor of a nautical lightning conductor, and Colonel Charles Hamilton Smith, a local botanist.

The 1871 census described William was a master optical instrument maker and photographer carrying on business in Plymouth with three men and a young boy as employees. Aside from these details, the census officer went into more detail which has been transcribed as the following: