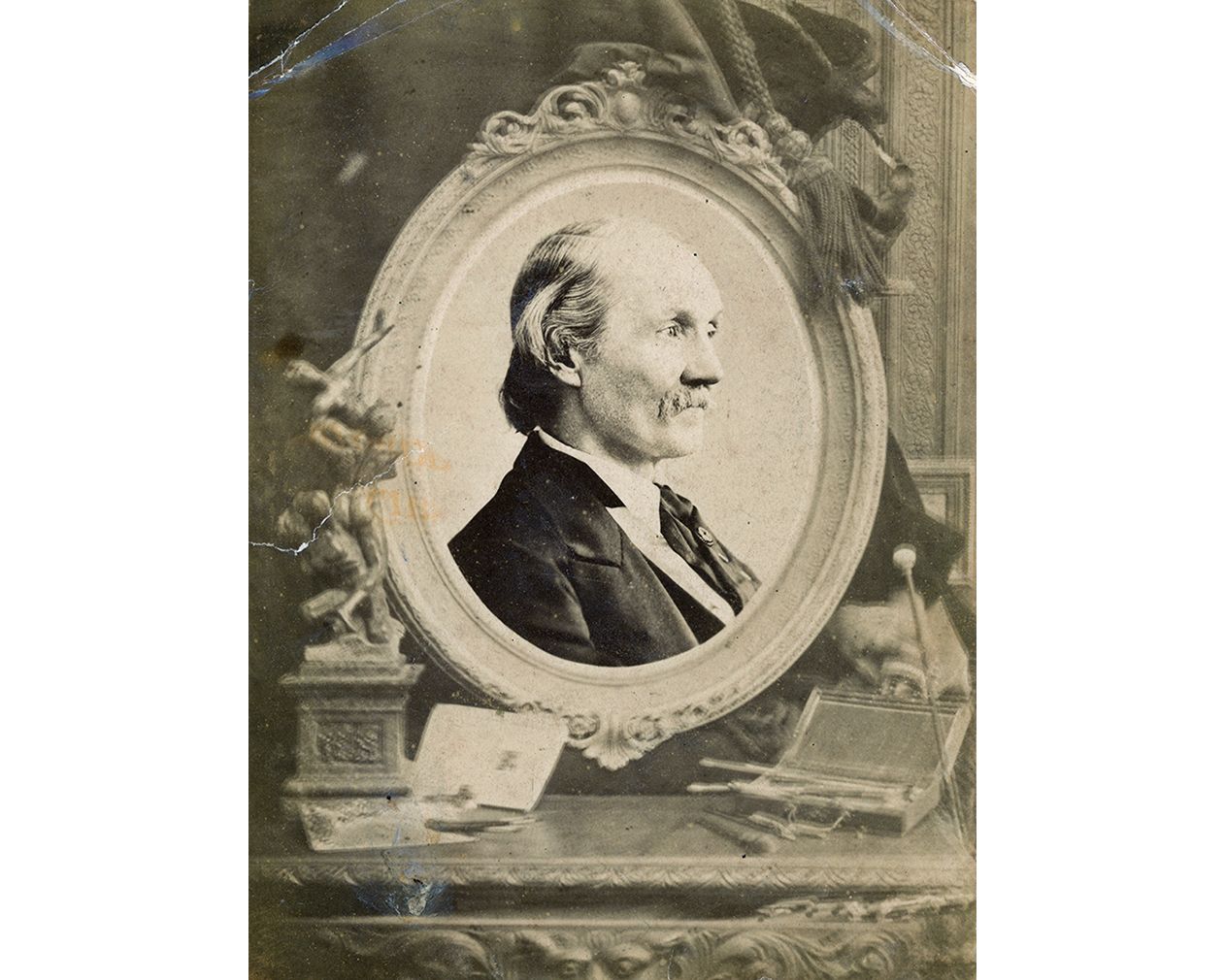 Depicted above in a memorial portrait of my fourth great grandfather Frederick Dodson Broadhead (FDB), which was printed around the time of his passing on the 15th December, 1878. This image was derived from a cabinet photograph belonging to Patrick Broadhead who is the son of William Broadhead, my great grandfather's eldest brother. FDB was an artist like his son Frederick William Broadhead; I attribute my own creative genes to these two gentleman from my paternal lineage. To date the extant photographs of FDB are the oldest living depictions of an ancestor from my family tree. On a side note before going any further, a permanent Patent Chromotype photograph by G. Rushforth of Barnsley was discovered that contained strong visual similarities.

This suggests that a negative containing a memorial border could be purchased from a vendor for use in combination printing with any portrait negative in the artists possession. Whilst the sideboard, frame, curtain and background are the same in both photographs, we can see that the arrangement of objects is different. FDB's contains tools and ephemera whilst the other has a more theatrical theme with props and instruments. Perhaps it was possible to order an ensemble that represented what the deceased individual enjoyed whilst they were living.

The main reason for my enquiry here is to confirm whether or not FDB was the first of his kind, or if there was a precedent in his family that caused him to pursue a similar profession. In 1841 he was living in a house on Beresford Street in St Helier, Jersey with another artist called Abraham . It is currently not known precisely why FDB travelled to the Channel Islands to pursue his occupation, but Christies sold a painting by him in 2011 titled View of Castle Cornet, St Peters Port, Guernsey Taken from the Heights" apparently dated to circa 1870. This proves that he produced landscape paintings across the Channel Islands as part of his artistic practice.

It is possible to associate this oil on panel with an artistic and literary movement known as Romanticism. Kathryn Calley Galitz from the Metropolitan Museum of Art wrote the following about this term:

Romanticism, first defined as an aesthetic in literary criticism around 1800, gained momentum as an artistic movement in France and Britain in the early decades of the nineteenth century and flourished until mid-century. With its emphasis on the imagination and emotion, Romanticism emerged as a response to the disillusionment with the Enlightenment values of reason and order in the aftermath of the French Revolution of 1789.

Although often posited in opposition to Neoclassicism, early Romanticism was shaped largely by artists trained in Jacques Louis David's studio. This alternative to Enlightenment thought often depicted nature as violent and terrifying which recalls the eighteenth century aesthetic of the Sublime. This is exemplified in a painting that J. M. W. Turner exhibited in 1812 depicting Hannibal and his army crossing the alps in harsh conditions. As FDB lived between 1813-78, it is possible to understand how his romantic landscape shares at least some DNA with much more well known artists such as those already mentioned but most vitally John Constable. My ancestor was clearly not as talented an artist, but there are visual similarities between their works.

Yale Centre for British Art have a painting by Constable titled Hadleigh Castle, The Mouth of the Thames - Morning after a Stormy Night which completed in 1829 and exhibited at the Royal Academy that same year. This work was considered one of his most monumental works by art historians Tammis Groft and Mary Mackay, through its depiction of Hadleigh Castle as a "decaying man-made structure succumbing to the elemental power of nature". The curatorial comments on Yale's website offer a more analytical and contextual understanding of this painting. They wrote the following:

The foreground vantage point is elevated and offers no convenient path into the difficult topography that descends toward the river flats to the right. The ruined castle clings to a rocky escarpment that winds into the distance and separates shepherd and cowherd and, presumably, their flock and herd. On the right, the Thames estuary opens out to the east, creating an immense, flat, gleaming distance beneath lowering clouds and theatrical slanting rays of morning sunlight. It is a landscape of revelation, not of domesticity.

FDB's landscape is in a similar way also elevated in the foreground before travelling down towards the right, where boats with their masts can be seen dotting the skyline in the far distance. The presence of boats is strikingly similar between both pantings, but there will be further elaboration on this shortly. There is also no path visible, just a drop to sea level from the cliffs where a few people can be seen regarding the view. These two aspects alone provide evidence that FDB was most likely influenced by other landscape artists of his time who were part of the same movement. John Constable was elected to full membership at the Royal Academy in February 1829, but Sir Thomas Lawrence, the President, told Constable that he should consider himself lucky to have been elected to the Academy since he was competing against several talented history painters. By the time Constable exhibited his 6-foot landscape in November, it would have left a strong impression on FDB who would have been around 16 years old at the time. Being conventionally picturesque and heroic, it would have served as a real counterpoint to history paintings that prevailed at that time. Having completed his painting just after the death of his life partner Maria, he remained depressed for the rest of his life referring to himself as a ruin of a man. It has been suggested that all of his boats were pointed downstream as if they were returning to sea, an allusion to the ancient Christian metaphor of death. This level of subtext is not exactly applicable to FDB's work of art seeing as it is inspired to the point of almost being derivative.