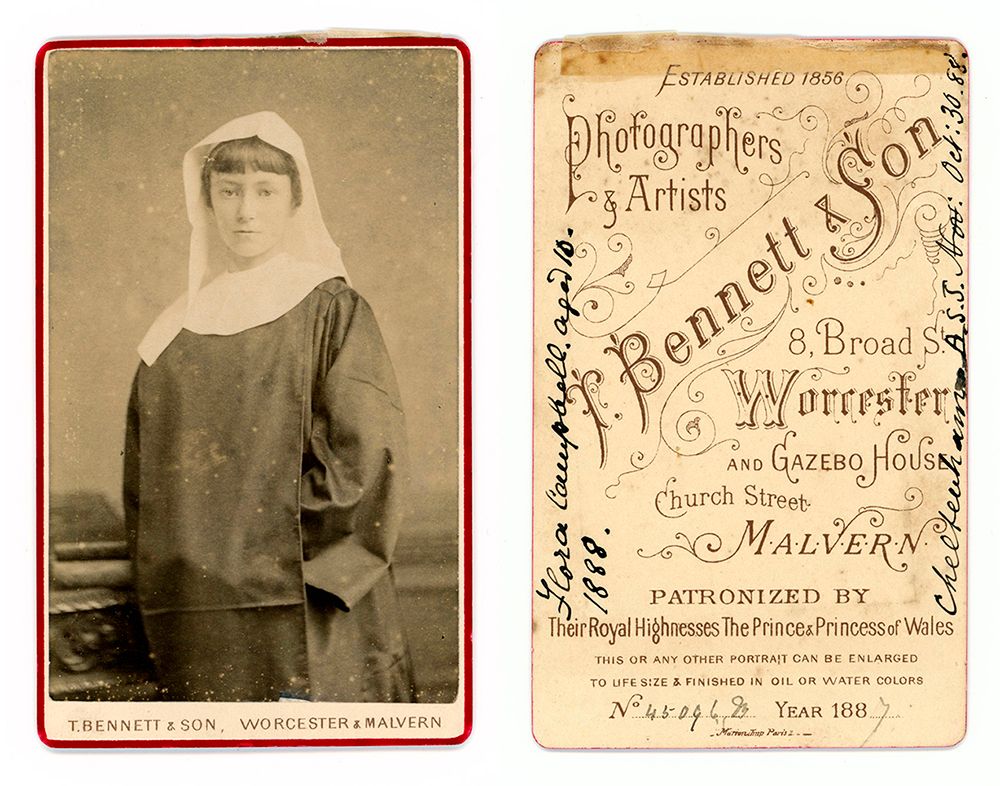 In my experience, it is not common to see a Victorian era photograph of an individual dressed in a nun's habit, but even less common for that person to be named with other pertinent details.

From T. Bennett and Son of Worcester and Malvern, this carte de visite is typical of the 1880's when there were more elaborate advertisements on the mounts.

Patronized by Their Royal Highnesses the Prince & Princess of Wales

This or any other portrait can be enlarged to life size & finished in oils or water colors.

We know right away that the photograph was taken in 1887, despite the handwriting on the reverse stating 1888. This immediate throws the accuracy of the notes into question, although the handwriting is clearly from the same era as the picture. It is important to draw attention to the fact that Nov: is also crossed out to be replaced with Oct: afterward. This also makes us consider whether there was complete certainty about the events associated with who is depicted.

To begin my investigation, the census records at FindMyPast were searched for anyone of the name Flora Campbell from their estimated birth year of 1878 up onwards in either Worcester, Malvern or Cheltenham. Those three locations were selected for the searches based on where the photograph was taken and a further location that was handwritten on the back. Sure as anything, a record came up for a Flora Campbell who in the 1891 census was shown to be living at a convent in Worcestershire. The exact address for this was as follows: The Convent, Pole Elm, Upton on Severn, Worcestershire, England. There is certainty that this is a positive match, as their birth year was recorded as 1878. Aside from finding out that Flora was part of the convent at Pole Elm, it is also revealed that their birth town Malvern Link is also situated in Worcestershire.

By calculating the distance from Malvern Link to the photographers studio addresses in Worcester and Malvern, it was possible to determine that Church Street in Malvern was only around a mile southward whereas the Worcester studio was more than seven miles northeast. This suggests a higher likelihood that the Malvern studio was visited, as on foot it was less than half an hour away. The Worcester studio on the other hand, would have taken over two hours on foot or travel via horse.

Now, it makes sense to establish where Malvern Link and the convent at Pole Elm are in relation to each other. Google Maps (below) shows that Pole Elm is situated just over four miles northeast of Malvern Link, in fact it is equidistant to Worcester. If Flora ever did walk between both locations, it would have been a very straightforward journey. Zooming in on the Pole Elm area on the same route shows that a former monastery now named Stanbrook Abbey Hotel is right on the corner of Jennet Tree Lane as visitors enter Pole Elm and Callow End.

Looking back at the 1891 census record again, a count was carried out of all those who were recorded as being present on Sunday 5th April 1891. Including the Convent Lodge, The Convent, Stanbrook Cottage and Stanbrook Villa there were 8 males and 77 females making up 85 residents in total. The all-female convent by itself was 73 of this amount. Of the three census pages below, Flora is situated towards the bottom of the second as a scholar. In terms of teaching occupations there was a first school teacher, assistant governess, English mistresses, music and French mistress, German and singing mistress, music mistress, and a drawing mistress. Out of the entire convent, only ten including Flora were scholars which means that there was almost as many teachers.

A birth certificate ordered, when this arrived a lot of facts were confirmed. Augusta Annie Mary Flora Campbell was born on the 14th March 1878 at 2 Park Villa, Alexandra Road in Great Malvern. Her father was Archibald Argyle Lochnell Campbell whose occupation was described as "Independent". This suggested at the time that they did not need to work, although this is cleared up further on. The mother's name has also been recorded as something interesting in the form of Annie Constance Campbell late Mac Clement formerly Fitzgerald. This means that Annie was previously married but had been widowed.

Cheltenham A. S. S. written on the back is a clue worth investigating. Assuming that the writing refers to a monastery, it may be referring to Prinknash Abbey which is in the village of Cranham in Gloucestershire.

A nun's habit usually includes a headpiece that is made up of three parts: a coif, secured by a wimple, with a veil at the back. The tunic of the habit is long enough to reach the ground and has long sleeves.