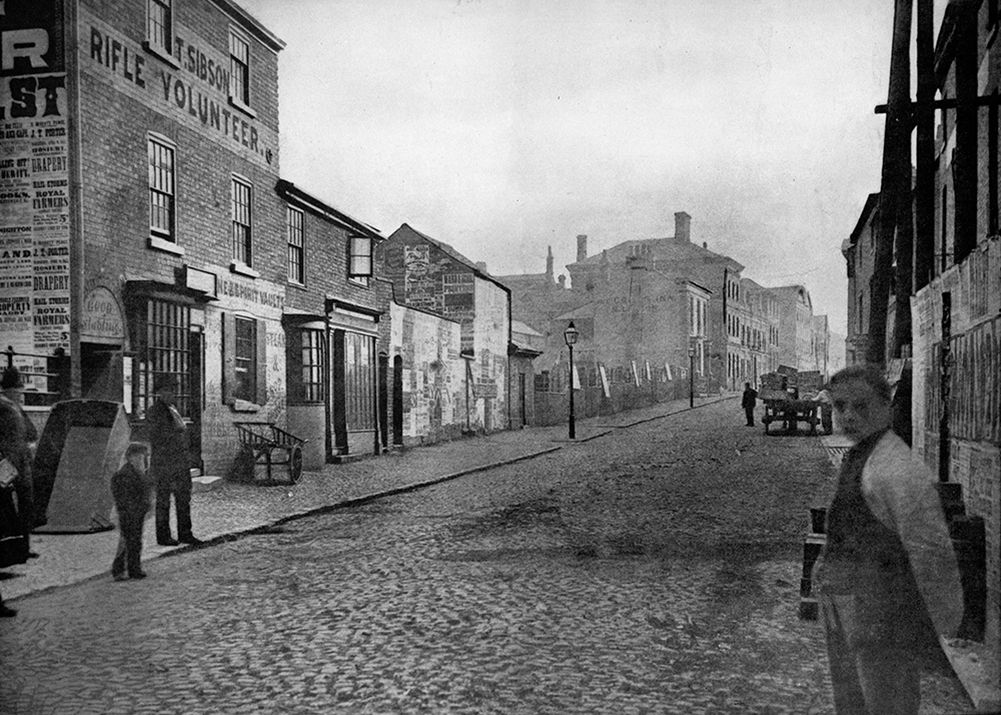 F. W. B. established his first portrait club at the Ivy Plant, Curzon Street in 1869. This was the year his newly established business moved from 84 Humberstone Road to 18 Welford Road. On the 27th October 1871, the Leicester Journal reported that “a closing supper of a portrait club was given at the Freemen’s Arms, Aylestone-road, by Mr. F. W. Broadhad, photographer, Welford-road, when upwards of thirty sat down. After supper compliments were made to Mr. Broadhead for the good portraits he supplied, when some music and singing brought a pleasant affair to a close.”

Audrey Linkman provides an insight into this club system, which was widely used by shopkeepers selling all kinds of goods in working class districts. She explained that the payment of small weekly sums to a shop would have made it possible to spread the cost of items beyond the amount available in their weekly wage packet. Furthermore, they conveyed that there “is evidence to suggest that, as might be expected with non-essential luxury items like photographs, certain individual photographers situated in predominantly working-class districts operated the club system in order to encourage sales.” (Linkman, 1993) Linkman goes on to write about how portrait clubs were readily organized in the work place “in the countless offices, factories, warehouses and mills which provided ideal venues in which to recruit members and collect the weekly dues on their pay day.” (Linkman, 1993) And as we already know from the previous Leicester Journal extract, they also flourished “in public houses where regular customers could be encouraged to join.” (Linkman, 1993)

The canvassers worked for a commission which was paid out on the condition that customers completed their payment of all installments. Advantages of using this system was that an army of recruiters exploited existing social networks whilst providing excellent word of mouth advertising, this was particularly effective “in tightly-knit working class communities where illiteracy may otherwise proved a barrier.” In addition to this, “it reduced the firm’s overheads and kept bookkeeping to a minimum, because the agents, in effect, undertook the administration of the club.” (Linkman, 1993) The Leicester Guardian reported the conclusion of multiple F. W. B. portrait clubs on the 26th June, 17th July, 4th September, and 13th November 1872. Each of these clubs had upwards of 30 members which would equate to 120 ‘guineas’ or £126 if all of his customers fully paid their installments. If this was all of his clubs that year and his sole income from photography, it would equate to £14,570.64 total turnover in today’s money. The agents who organized a portrait club at The Prince Alfred, Havelock Street were described as Mr. King and Mr. Mark Taylor. The latter individual was recorded in the 1871 census as an ‘Elastic Web Weaver’ living in the municipal ward of St. Mary where F. W. B.’s business premises was also located. The occupation of this agent provides further evidence that workplaces were used for recruitment and the regular collection of monetary installments. On Wednesday 28th January 1874, Leicester Guardian printed an advertisement that stated:

F. W. BROADHEAD’S GUINEA PORTRAIT CLUB WILL commence on MONDAY, the 19th of January, at Mr. BENNETT’S, Rutland Arms, Ward’s-end, Market-place, Loughborough; also at Mr. G. COOK’s the Old Angel Inn, Baxter-gate. Several Portraits, finished from Mr. Bennett’s last Club are now on view at Mr. Bennett’s, and other specimens may also be seen at Mr. Cook’s. Members wishing to join either of the above Clubs, will oblige by making early application.”

This is the earliest reference to the ‘guinea portrait’. A guinea was at that time equivalent to twenty-one shillings which matches the amount advertised for ‘portraits in oil’ in an advertisement published in Leicester Journal on the 26th November 1869. Despite being replaced by the pound in 1816 the guinea remained a part of British national culture and business long after that date. Throughout the nineteenth century it was the favored denomination for upmarket services as “it retained strong aristocratic overtones and was widely regarded as an indicator of exclusivity and quality.” (Olusoga, 2016) Newspaper records suggested that a ‘guinea’ or twenty-one shillings for an enlarged club portrait, painted in oils and mounted in a gilt frame was moderately cheap compared to other establishments that often offered the same product for 25 shillings or more. We are also made aware that finished portraits were exhibited at the venues where individual clubs were based. By June 1874, the portrait clubs were prospering, with the Leicester Guardian describing 72 club members present at George the Fourth, Wharf Street with over 100 signed up for the next. On May 25th 1875, the Leicester Daily Mercury printed a caution issued by F. W. B. which marks an unfortunate consequence of his successful club work in Leicester:

HAVING been informed by several of his friends and patrons that they have been induced by misrepresentation to join PORTRAIT CLUBS with which he has no connection, and have thereby had palmed on them Portraits far inferior in quality as Works of Art to those produced by him, thus causing loss and disappointment, F. W. B. has to request that his friends and the public will for the future be particular in their inquiries, and require the production of his Card before being induced to join any such Club, as a guarantee of good faith on the part of those canvassing them.

This announcement suggests that F. W. B. had built up a strong reputation for his works of art which presented new problems to contend with. It is important to mention that was the last time any public notice about his portrait clubs were issued, which demonstrates F. W. B’s. willingness to explore new opportunities in his work. A large photograph taken of an equilibrium crane manufactured by H. H. Appleby Brothers dated 7th November 1874 foreshadowed a move into machinery photography described in more detail elsewhere in this text. Large firms such as A. & G. Taylor later became known for their club package which provoked the opposition and censure of fellow photographers. “In the eyes of some, canvassing was akin to touting, and touting equated with low trade practice. Canvassing therefore degraded photography and demeaned those photographers who dirtied their hands with the practice. To the likes of Henry Peach Robinson, club trade was regarded as ‘an ingenious application of the screw to compel poor people to spend some of their hard-earned money on photographs’. They felt that the ‘touting club system’ had ruined the enlargement business.” (Linkman, 1993) H. P. R. had studios based in Leamington Spa and Tunbridge Wells which were upmarket spa towns that prospered during his time there. Looking at a complete survey of F. W. B.’s career makes it evident that club work was what enabled ‘poor people’ to access a luxury product which would have otherwise remained completely out of their reach. Perhaps controversially, it could be said that H. P. R.’s statement suggests that ‘poor people’ should not be allowed to have nice things simply because of their social class. This makes F. W. B. seem more like a democratic people’s photographer especially when the success of his clubs is taken into consideration. It is likely that they had no choice but to be competitive in the early years of his business, but he soon become established enough to move beyond that kind of work. Linkman expressed that high-class studios had to “balance the loss of status that befell those handling club work with any potential financial benefit that could arise from an increase in the volume of sales.” (Linkman, 1993) With this in mind, it is possible that F. W. B. was aware of his growing status. F. W. B. never gave up using the canvassing system, but unfortunately there were a number of occasions where money was not handed over to the photographer or situations where members of the public were defrauded by pretending to work for a local firm and ‘absconding’ with initial deposits.