An excerpt from From the Life of Horace Vernet by Charles Dickens. 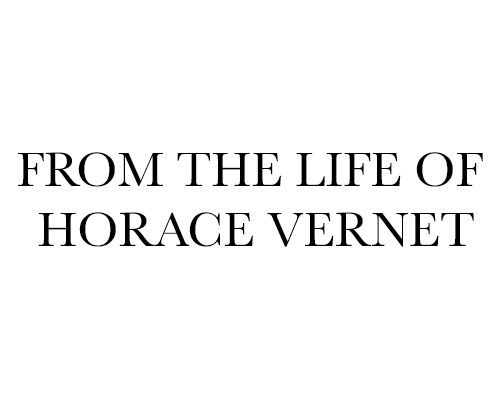 FROM THE LIFE OF HORACE VERNET.

If an artist wishes to establish a great reputation among the soldiery, the best thing he can do is to ornament each of his patrons as he would a field-marshal. They rarely patronise the photographer, perhaps because his works are too truthful. The soldier having listened to the merits of different artists, selects the one whom he will patronise, and in full dress pays him an official visit. The painter receives him with every sign of high consideration, draws from a folio a lithograph, which he hides carefully from the eyes of his patron  —  a lancer, if the man be a lancer; or a cuirassier, if the man be a cuirassier. He poses his subject in a graceful position, answering to that of the figure in the lithograph, and proceeds then to fill in the colours. The consequence is, that if fifty dragoons have their portraits painted, the fifty will all be in one attitude. If, however, there be twenty blonds, twenty will resemble one another as peas do peas, and all the dark ones will appear to the inexperienced eye a band of brothers. But as the shepherd learns the physiognomy of sheep, so it is that amongst themselves the men will select the portrait of any man in particular, although the pictures are all printed from one stone. For, in each picture there is some distinctive mark. One man will insist upon having a cigar in his mouth: the artist is obliged to comply with his wishes — another wants his sword out of the sheath, in his right hand. This is rather an awkward job, for the hero of the lithography has already a sword by his side; however, to oblige a customer, it must be managed. A knife erases the hilt over the scabbard, and a drawn sword is represented in the hero's hand. When this is done, the man certainly generally looks as if he were violating all the laws of war, and offering his sword for sale! He seems to say to the spectator, " It is yours for twopence."

Another man not approving of the scarlet tint of his trousers, suggests that they should be painted pink; another, that his coat should be changed from dark olive to a bright emerald green, or from Prussian blue to ultra-marine. In all cases the artist is most amiable; and if he gets but his twenty sous, offers his customers a choice of all the colours of the rainbow. Actually, then, these pictures, if they do not give the physical proportions of each subject, generally represents some idiosyncrasy which marks the original.Grosjean, desiring to be handsomely painted, rigged himself out in gala dress, twisted his moustache into wiry "crocs," and wended his way through Versailles to the artists studio. If, as he ascended the grand staircase of polished oak, he had any doubts whether a painter living in such a mansion would do him a portrait for a franc, the fact of my having given him the address would have sufficed to reassure him; for, to a good French soldier, his captain is infallible. The captain of a troop serves to his soldiers in lieu of father, mother, banker, friend, and often spiritual adviser. If the captain says a thing is so or so, that settles it.